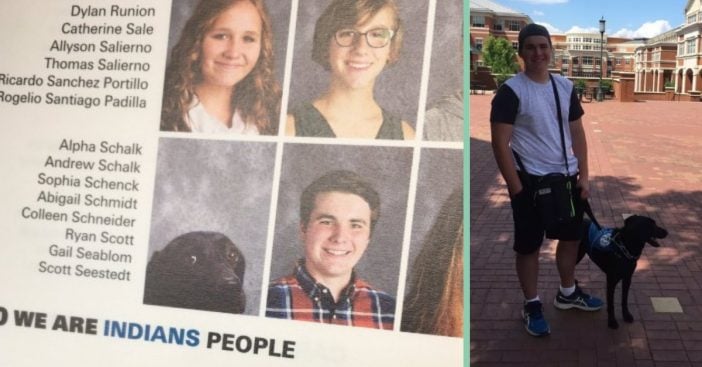 Alpha’s job is to detect when Andrew’s blood sugar levels are too low or too high and to alert him. Alpha has saved his owner’s life many times, proving just how great he is at his job! Alpha is beloved by the school’s community, so much that he even earned his own ID card and his own photo in the school’s yearbook!

It was actually Andrew’s idea to have his service dog’s photo put in the yearbook, and the faculty of the school were more than happy to do that! This was when the Twitter post above went viral when a student of the school took a photo of the dog’s picture in the yearbook. It’s just too wholesome!

This also isn’t the first time that a service dog has earned a spot in the school’s yearbook. An elementary school located in Lake Charles, Louisiana allowed a service dog named Rowdy to be in the yearbook for three years in a row!

“The amazing thing about Alpha is that he knows 20 to 40 minutes before my blood sugar actually does go low or high due to his amazing sense of smell,” Andrew revealed to BuzzFeed News, “I just brought him with me when I got my yearbook picture taken. The only thing they changed was the camera height. They just had to lower it a little.”

“He has been a great companion and added a lot of happiness to my school’s environment,” Andrew explained, “It brightens people’s days seeing him in the halls or in my class and I love being able to have that effect on people.”

“Yes, Alpha is really an amazing animal,” Andrew says about his service dog, “He makes a disability, such as my diabetes, such a positive experience for me and my life overall, and really turns it into a blessing rather than a negative part of my life.“

What a heartwarming story and a beautiful way to honor all service animals! Be sure to SHARE this article if you loved this story!