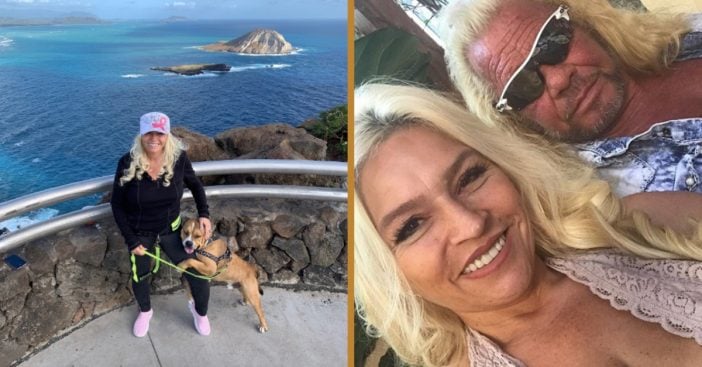 Even while battling stage four lung cancer, it looks like the bounty hunter star is not letting it slow her down anytime soon! Beth Chapman recently posted a photo kicking cancer’s butt after a grueling hike in Hawaii. After the star was recently rushed to the hospital with breathing problems, it’s incredible to see her bounce back so effortlessly.

The photo of her smiling self with her dog is only part of the view! Behind her, the blue ocean waves of Hawaii captivate those who are strong-willed enough to make it to the top of that hike. “Hiked makapuu with #dukekahanahighmakamakaoflola this morning, boy did that feel good to make it to the top without any problems, it’s such a personal accomplishment to continue to do the things I love,” her photo’s caption read.

Hike’d makapuu with #dukekahanahighmakamakaoflola this morning boy did that feel good to make it to the top without any problems it’s such a personal accomplishment to continue to do the things I love #notdoingthat #fuckcancer #wgna @dogsmostwanted pic.twitter.com/e6Piv7eZA7

Just a few weeks ago, Beth was rushed to the hospital with breathing problems. “Beth was hospitalized Saturday due to an accumulation of fluid in her lungs. Doctors performed an emergency procedure to alleviate pressure that had built up,” the official family Facebook statement said.

“She is now at home resting with her husband. She and [husband Duane “Dog” Chapman] are so grateful for the thoughts and prayers from their fans. Keep them coming.”

The following day, US Weekly allegedly revealed that “doctors drained almost four liters of fluid from her lungs.” Despite the heartwrenching news that none of us want to hear, especially the Chapmans during this time, they say they don’t listen to it at all.

“I don’t listen to the bad news. I don’t want to hear it,” Duane Chapman says, “I pray a lot, anywhere. I cry all the time … I constantly ask God to heal my honey and make sure He takes care of it.”

Beth was diagnosed with an aggressive form of cancer after undergoing surgery to remove throat cancer in 2017. She was rushed to the hospital in November 2018 to remove a blockage in her throat when doctors discovered an ‘incurable’ form of cancer that had returned, which we’ve now learned is stage four lung cancer.

Despite her health ailments, she appears to be in good spirits and she is surely not letting cancer define her outer appearance either! She’s looking absolutely beautiful these days and her fans are quick to remind her of that, regardless of everything.

Be sure to SHARE this article with well wishes for Beth. We hope and pray that she’s getting strong every day!

Check out the video below of Beth Chapman talking about her cancer battle at the beginning of this year:

Previous article: Woman Sparks Controversy By Posting Photo Of Her ‘Fine’ Doctor Without Permission
Next Post: Nine Places You Are Forgetting To Vacuum In Your Home