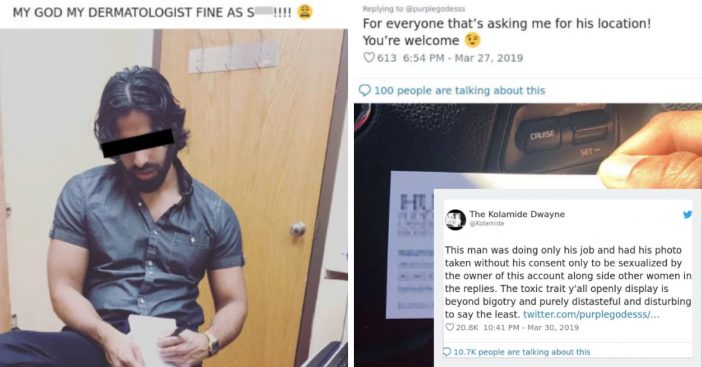 A woman has sparked a discussion in not only sexism but privacy concerns as well after she posted a photo of her ‘fine’ dermatologist doctor without his permission or consent. It started a few weeks ago when the woman posted the photo on her Twitter with the caption, “My God my dermatologist fine as s**t!!!!”

Of course, others were quick to pick up on the tweet and started adding their own replies to how great he looked. Everything was fine and dandy until the post made it onto a ruthless Reddit thread and a Twitter user pointed out how this woman was in the wrong to post a photo of her doctor without permission.

They said, “This man was doing only his job and had his photo taken without his consent only to be sexualized by the owner of this account alongside other women in the replies. The toxic trait y’all openly display is beyond bigotry and purely distasteful and disturbing to say the least.”

The woman was unbothered by the criticism and took it a step further. She then shared a photo of his business card with his name and contact information on it.

The woman then posted a photo of the engagement and impressions that her initial post received and gloated about making her doctor “go viral.”

So, did the doctor ever find out about his information and photo being released to strangers on the Internet?

Yes, yes he did. Bored Panda managed to find this doctor and reach out to him with his thoughts on the situation.

“My first reaction was just pure anxiety,” the doctor explained, “I am a very low key individual so when I first heard that I was trending on Twitter I was kind of freaking out […] I started getting texts from friends all over the country, some of whom I hadn’t spoken to in years, telling me that I’m the top post on Twitter. Once the anxiety settled though, and I realized that most people were receiving my picture favorably, I started to find the whole situation pretty funny.”

The dermatologist doctor, now officially identified as Dr. Imran Aslam, confirms that he is fine with his photos being on the Internet. With this being said, the doctor also responded to the assumptions and allegations of sexual harassment, privacy issues, and double standards related to the woman who released the photo to the Internet.

You can read his full statement on that below:

“By definition, many of the comments on my picture would be considered a form of sexual harassment, and I can totally understand how people consider this to be a double standard in light of the #metoo movement. And that if those same comments were made about a woman there would an uproar. From my perspective, I would be remiss if I didn’t acknowledge the fact that I never felt that I was a ‘victim’. As I reflect more on this sentiment I realize the reason for this is undoubtedly because of my ‘male privilege.’ I have had the privilege of never once feeling threatened or intimated by a woman in a sexual manner, I have had the privilege of never being catcalled, and I have had the privilege of never experiencing what it’s like to be followed home by a stranger that was a woman. It is because of these liberties that we enjoy as males that I think the sexual harassment discussion may have to be interpreted differently in my situation.”

What do you think about this story? Do you think this woman was in the right to post the photo or not? Be sure to SHARE this article with your thoughts!