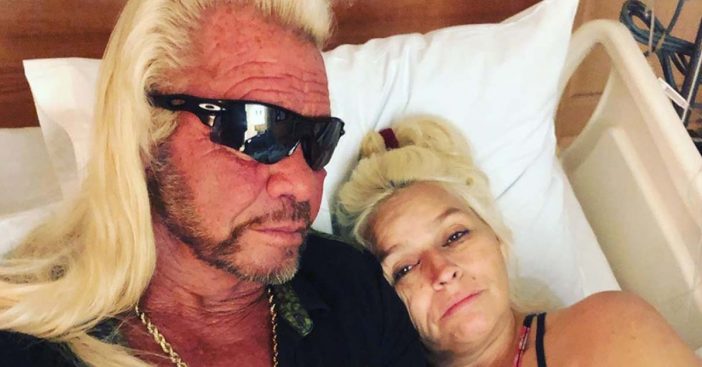 Beth Chapman, the wife of Dog “the Bounty Hunter” Chapman, was rushed to the hospital in Hawaii on Saturday, April 6 for breathing issues.

‘She hasn’t been feeling well of late and Dog is by her side. One thing everyone knows about Beth is that she’s a fighter.’ a source told the site.

Official Report:
“Beth Chapman has been rushed to a Hawaii hospital with serious breathing issues,” a source tells Us. “She hasn’t been feeling well of late and Dog is by her side. One thing everyone knows about Beth is that she’s a fighter.”

Dog The Bounty Hunter star Beth Chapman was first diagnosed with throat cancer in 2017 and beat it in the same year. Unfortunately, she was diagnosed again just a year later with what we now know is stage four lung cancer. Despite this incredibly heartbreaking confirmation, Beth seems to still be in good spirits and, to be honest, looking incredibly healthy, too.

Duane Chapman, Beth’s husband, has released an update to Daily Mail on his wife’s health and he’s extremely determined to not let this cancer diagnosis slow either of them down.

In a video with Daily Mail, Duane Chapman said, “I told her the other day I love you so much I’m not gonna let you die. I stay positive and, you know, you can’t admit defeat, you just cannot. I have to stay strong.”

Despite the cancer diagnosis and receiving treatment in the form of chemotherapy, the two continue to film for their new show, Dog’s Most Wanted, which premieres in May. “Beth is there, my son Leland is there, we’re all together a team the family out there, we don’t think about nothin’ but that,” says Duane, focusing on the positive instead of the negative during this time.

Even though Beth has been undergoing chemotherapy treatments, her husband revealed that she will apparently not accept any form of prescription medication that her doctors recommend. She definitely seems to be more keen on living every day like it’s her last given her cancer battle.

“She has told me repeatedly that if these are her last days on earth she wants to spend every moment with me on the hunt, living life to the fullest and enjoying the time we have left together,” He revealed. He then added, “Mark my words, I will not let her die.” Cue the tears.

“I have to keep faith, I am the leader of the family. She thinks she is, but I am. I have to keep it where I don’t have any doubts and keep everything positive. I love my honey so much, I don’t know what I’m gonna do.” Duane said to InTouch Weekly.

We absolutely love this power couple and their courage during this difficult time.

We are praying for the Chapmans during this time! Be sure to SHARE this article with your well wishes. We’re hoping Beth is pulling through!