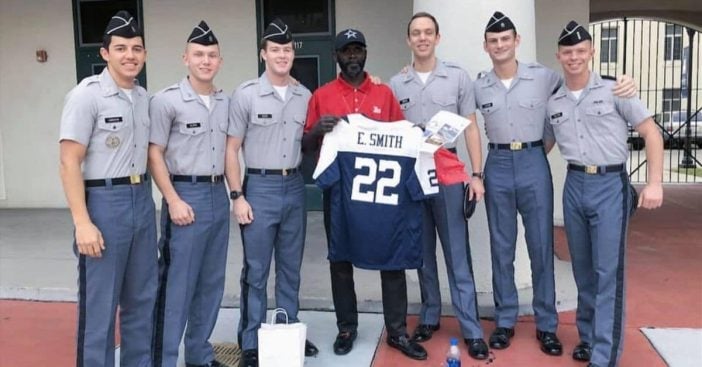 The Citadel cadets from Charleston, South Carolina gave the longtime Citadel janitor the Christmas gift of a lifetime. They raised around $1,800 to send janitor Dwight Holmes to Texas to see his favorite football team, the Dallas Cowboys, in person. Even better, it was a front-row seat!

Dwight never misses a Dallas Cowboys game and often watches it while he works. He said that he’s loved the team since 1970 because his grandparents were Cowboys fans. One of the cadets, Sam Ouzts said, “He’s just one of those guys, more than a face in the crowd. He takes time out of his day, invests it in us, takes a special interest in our lives. The least we can do to give back to him and give him something.”

Cadets give an incredible gift to longtime janitor and friend

When the cadets first had the idea, they thought they might pool together their money and get him a Dallas Cowboys jacket. But, they kept raising money until they had enough to actually send him to the game in person. Sam continued, “The generosity that everyone had that supported us, it was unreal.”

After the money was raised and the tickets were bought, Dwight was told to be at the barracks at 7:45 am. He said, “They gave me a bag. I opened it up, looked in it, and it was an Emmitt Smith number 22 jersey, a gift card, plane tickets, a hotel, expense money. They took care of everything for me to go to the stadium. They raised a bunch of money. I was shocked, I thought it was just a jersey. They said to look a bit deeper It was everything. Real nice.”

He continued, “I’m kinda choked up. I wasn’t expecting that. It’s a front-row seat.” What a sweet gesture for the holidays! In conclusion, watch Dwight’s reaction below:

Longtime Citadel janitor Dwight Holmes means a ton to the cadets in Echo & Hotel companies. Today, they surprised him to let him know exactly how much he means to them. Overwhelming, to say the least. A lifelong Dallas Cowboys fan, will now fulfill a lifelong dream. His reaction pic.twitter.com/HaUugbRWmL