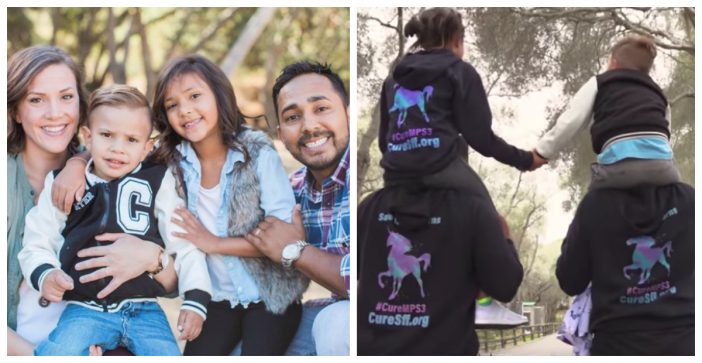 Unbeknownst to many, childhood Alzheimer’s is a real disease, medically called Sanfilippo syndrome. 6-year-old Carter Sarker was diagnosed with Sanfilippo at around 12 months old when doctors noticed he wasn’t hitting all of his milestones and was a bit behind. At first they thought it was nothing.

Once diagnosed, doctors proclaimed that Carter would eventually lose all abilities he’s learned, including how to walk and eat. Additionally, he will eventually be bound to a wheelchair and not be able to speak or to even survive.

Sanfilippo is a genetic condition that causes an abnormality in his DNA which then causes a critical enzyme to be made improperly or not at all. Without this, his body cannot break down and recycle cellular waste, by which it eventually begins affecting the brain. Doctors predict that Carter will not make it past his teenage years.

“When I found out that he had Sanfilippo, time just stopped for me. All of our dreams, all of our ideas of what Carter was going to do with his life and the time that we were going to spend together all stopped,” Samir, Carter’s father, said.

The Sarkers have learned about a clinical trial that may be able to provide treatment for Carter’s disease. They are aiming to raise $1 million for the Cure Sanfilippo Foundation in only a month! Celebrities like Madonna and Cher have donated to their fundraising page. Without this clinical trial, Carter’s health will deteriorate rapidly. The only notable symptoms as of right now are periods of memory loss.

The Sarkers have explained that every few months or so Carter will have episodes where he forgets his surroundings and will throw tantrums.

“It’s happened on the way to the zoo. He loves animals and to go to the zoo and was so excited to go but when we got there he lost all recognition of his surroundings. The episodes completely overwhelm him. He starts asking to go back to Mommy’s car because at that point in time that’s familiar to him and he feels safe,” the family explained.

You can donate to the Saving Carter fundraiser and help him get his clinical treatment here.

Be sure to SHARE this story with your friends and get the word out about Saving Carter!