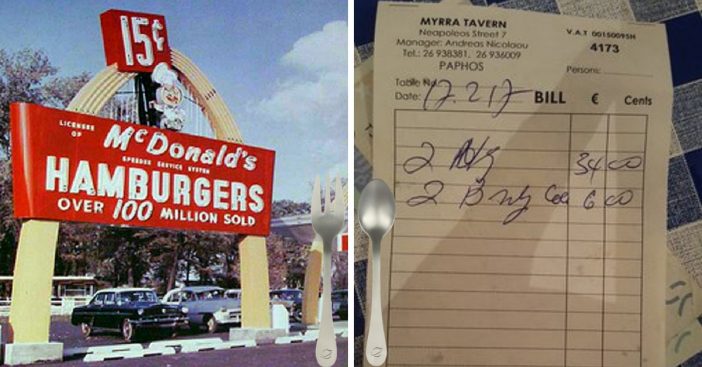 Eating out at restaurants was very different compared to how it is today. Every restaurant has their own niche that makes it stand out from others. Or, if we’re lucky, we get to experience vintage, old-fashioned diners that give us just a glimpse into what restaurants were like way back when.

From the food being much cheaper back then to the table checks being written by hand, there was a lot of differences in restaurants back in the day. Do you remember any of these experiences when you went to a restaurant 50 years ago? We bet you do!

1. It was a big deal if you had a telephone at the table

While dining out with your cell phone right next to you nowadays is considered rude, back in the day, it was pretty awesome if you had telephone access at your table. It was usually a thing at high-end restaurants or VIP diners.

2. Checks for the table were hand-written

Back in the day, everything was written onto a pad of paper along with the price right next to it and the total below. There are some diners out there that still go by hand-written checks, but they are very few and far between with the rise of the digital age.

Drive-ins were becoming popular, which started featuring the first car-side services by “carhop” waiters and waitresses.

4. McDonald’s was on the rise

The fast-food chain was really on the rise by incorporating some of the newest fads on the market, which included drive-in services. This was also when they began implementing the Big Mac on their menus!

It was not until 1966 that places like KFC began popularizing their takeaway services. Their advertisements for takeaway began saying, “We fix Sunday dinner seven days a week.”

6. Menus were a lot shorter back then

Nowadays, we absolutely love the novel-length menu at The Cheesecake Factory. Menus back in the day were a lot shorter and asking for substitutes earned you quite the dirty look.

7. The food was much cheaper than it is today

Back then, a roast turkey dinner with sides came out to 70 cents in 1963. Nowadays, all of that at your finest establish would easily spike up close to $100.

8. There was no sparkling water available

Sometimes when dining out you like to get a bit fancy with your water options.

Back then, there were no options for sparkling water. Water, soda, and beer were the main beverages back then, but sparkling water began to dominate the restaurant industry in 1977.