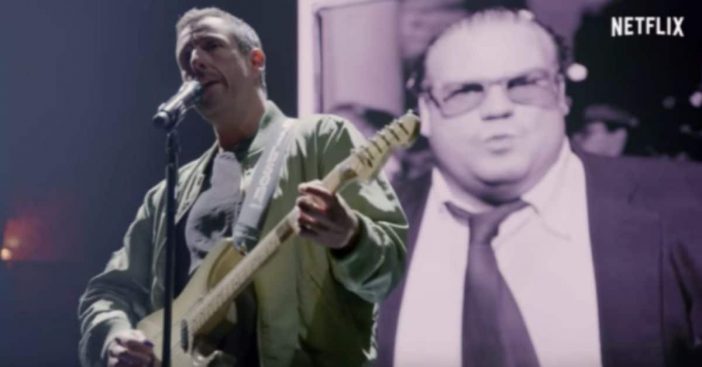 Just yesterday marked the anniversary of Chris Farley’s death. He died on December 18th, 1997 at age 33 from a combination of cocaine and morphine in his system. Farley was an American actor and comedian, best known for his appearances on Saturday Night Live between 1990 and 1995.

Recently, actor and comedian, Adam Sandler, teamed up with Netflix to produce a special called 100% Fresh, where within the special he performs a musical tribute to the late Farley. The song, written by Sandler himself, touched on special moments throughout their friendship together, Farley’s best moments on SNL, and his health decline in his later years and untimely death.

“On Saturday Night, my man would always deliver, whether he was a Bumblebee Girl or livin’ in a van down by the river,” says Sandler in the song, referencing some of Farley’s best moments on the show.

All of the happy memories came to a halt in the song when Sandler would begin to note that Farley would party pretty hard back in the day, to which Sandler would warn, “We told him, ‘Slow down, you’ll end up like [John] Belushi and [John] Candy.’”

Chris Farley: The Party Comes to an End

The party comes to a sad, somber ending when Sandler sings, “The party came to an end. We flew out to Madison to bury our friend. Nothing was harder than saying goodbye.”

While Sandler is famously known for his comedic songs like the holiday-friendly “Chanukah Song,” his comedy took a backseat in this moment of his comedy special to pay tribute to his very good friend. Just like John Belushi 15 years prior, Farley did pass away from a drug overdose but is always remembered as the pinnacle of true, belly-laughing comedy.

While Farley’s career in film and television was short-lived, he went on to star in some of the biggest movies known to man such as Tommy Boy (1995) and Black Sheep (1996). Both of these films, individually, earned around $32 million and were considered a box office smash upon the time of release.

There were some unfinished projects that Farley had taken on while he was still with us. He was originally supposed to be the voice of DreamWork’s Shrek but died before recording took place. He was also slated for a voice acting role in the animated film Dinosaur and was also supposed to appear in a third Ghostbusters film.

Please SHARE this article if you will always remember and love Chris Farley.

RELATED: The Creation of Chris Farley’s Most Beloved Character, Matt Foley (VAN DOWN BY THE RIVER)