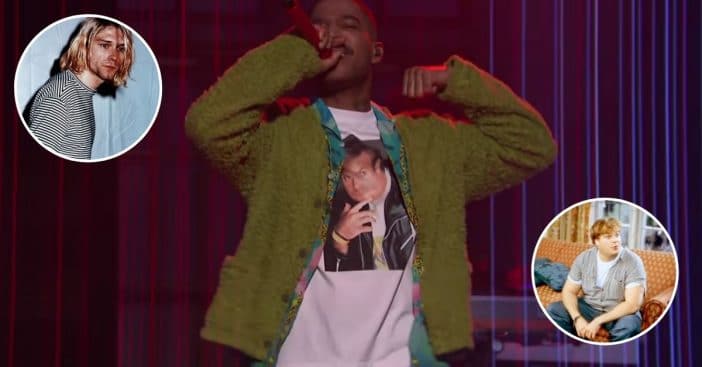 Rapper Kid Cudi recently appeared on Saturday Night Live as a musical guest. During his performances, he honored two incredible people. He let his outfits for the performances honor the late SNL actor Chris Farley and the late musician Kurt Cobain. Both died in the ’90s.

During his performance of “Tequila Shots,” Kid Cudi wore a T-shirt with a photo of Chris. It sounds like Chris was his favorite SNL actor as he also shared a photo of a sign at Studio 8H that read, “Watch your head.” Someone wrote next to it, “Farley.”

Later, while performing his song “Sad People,” the rapper wore a floral dress that looked very similar to the ones that Kurt wore during his shows. Kurt also wore a floral dress on the cover of The Face magazine in 1993. He was best known for his feminine but grunge attire.

He has been open in the past about his mental health struggles, similar to those faced by Chris and Kurt. Fans were quick to point out the tributes. One fan tweeted, “Kid Cudi pulling the ultimate Kurt Cobain tribute on #SNL on the week of this death. @KidCudi all about love and suicide prevention and awareness!!!”

Kid Cudi is such a legend for this man pic.twitter.com/uj8f4SmJAb

Others noticed his Chris Farley shirt and one wrote, “Kid Cudi with a wonderful shirt choice on SNL.” Did you watch the episode and notice the tributes?

Click for next Article
Previous article: Hugh Jackman Shares 1996 Wedding Photos To Celebrate 25th Anniversary
Next Post: Take A Look Back At Some Of The Duke Of Edinburgh’s Best Moments