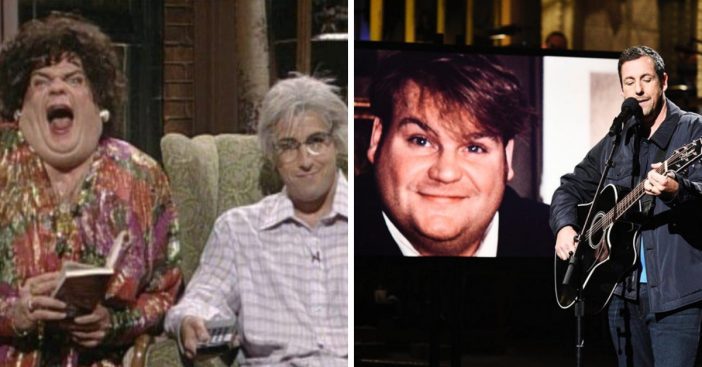 Adam Sandler was recently a host on Saturday Night Live (SNL). Adam was a cast member on the popular sketch show from 1990-1995. During this time, he often acted with the late comedian Chris Farley and the two became very close friends.

On the recent episode of SNL, Adam returned with some hilarious sketches and nods to his past working on the comedy show. At the end of the episode, Adam sang a song about Chris Farley which chronicled their time together on and off the show. You’ll need to grab a box of tissues before watching this one.

Adam and Chris worked together on SNL for many years

Chris Farley was a popular comedian in the ’90s, who worked on SNL but also starred in movies like Tommy Boy and Black Sheep. Unfortunately, Chris died of a drug overdose in December 1997, but his legacy clearly lives on in the hearts of fans and those who knew him.

During the song, clips of Chris played in the background. The song shared more about Adam and Chris’s friendship, how Chris used to prank fellow comedian David Spade and even personal stories from his past. If you loved Farley, this is a song you should not miss hearing.

Adam and Chris were both fired from SNL in 1995. At the beginning of the recent SNL episode, Adam sang a song about his firing and even brought back Chris Rock (he was also reportedly fired from SNL). Adam said he still doesn’t know why they were fired, but he went on to have great success in the movie industry.

So clearly, he doesn’t have any regrets!

Adam and Chris’s last show as cast members was on May 6, 1995. Adam often refers to Chris as the “funniest man he has ever known” and talks about how much he misses him. We sure do miss Chris Farley’s hilarious humor. We definitely lost him too soon. He was only 33 years old. Did you enjoy when Adam Sandler was on SNL? Did you often watch Adam and Chris Farley on SNL when they were regular cast members? We really miss those days!

If you enjoyed this article, please SHARE with your friends and family who miss Chris Farley and his hilarious antics!

Watch Adam Sandler’s entire song about Chris Farley below and make sure you have those tissues handy! It is very heartwarming:

If you SNL, check out our Top 10 Sketches from the Original Prime Time Players!!! 🙂 Just the Best!

Click for next Article
Previous article: Airline Crew Helped One Father Pull Off A Hilarious Mid-Air Prank On His Daughter
Next Post: Six Things You Should Never Do While Sailing On A Cruise Ship