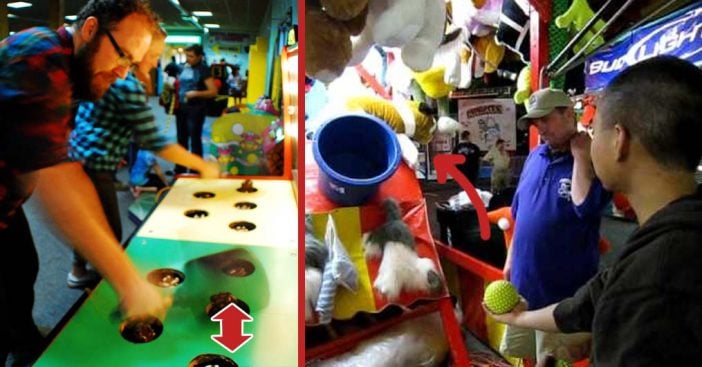 Carnivals are the epitome of nostalgia, especially for when you were little and craved that pink or blue-colored cotton candy the moment you stepped onto the grounds. The feeling doesn’t go away as an adult, either, as it’s difficult to forget the magic and fun of carnivals during the autumn season.

However, there are so many tricks and secrets that go on in carnivals that you may have thought about or might have not even crossed your mind. Do you remember the last time you went to a carnival and considered any of these things? Here are 12 secrets that carnivals don’t want you to know!

Many of the games at carnivals are actually rigged to be a lot harder or a lot easier to win at. With this being said, there’s also a secret to the famous ring toss game so you could potentially win the big prize next time. Toss the ring upward and give it a decent arch with a little spin and you might have a shot at landing right on the bottle.

It’s really suggested to just avoid the duck pond game at all costs. Of course, your kiddos are probably going to want to play anyway, but it’s probably better to persuade them with buying a toy from one of the gift stores (which, by the way, probably goes for the same price as the game itself and you are still guaranteed a toy at the end).

Not a lot of carnivals do it this way anymore, but at some carnivals, the way to win a fish was to try and toss a rock (or something similar to a rock) into a fish’s container. If it landed in a container, you won the fish. This is now considered cruel and unusual, so it’s suggested to stay away from games like this. You can always buy a fish for $5 at Petco.

If you’ve ever played a dart game at a carnival where the goal is to pop the balloon, but the balloon doesn’t seem to pop, there is a secret behind that one. The ends of the darts are dull, so they’re not exactly designed to pop the balloons on target. The balloons are also extremely under-inflated, meaning that automatically sets players up for failure. Don’t waste your money or just throw your dart really hard next time- although there’s a higher chance your accuracy will be off.

Every muscle man out there will immediately go to grab the mallet and show off his strength at the high striker game. However, in most instances, the bell doesn’t ring and it actually is not even close to being rung realistically. Why? It’s all up to accuracy. You have to hit the pad dead-center in order to receive a higher probability of ringing the bell. By simply hitting any part of the pad with all your strength, you probably won’t be hitting that bell anytime soon.

It’s suggested to not even bother with the swinger game either, and it’s because of physics. The goal of the game is to take a ball attached to a cord or string and get the ball to knock over a bowling pin. You can’t knock it over on the way forward, meaning that it must be performed going backward. Despite this, physics says that it’s impossible due to the ball just swinging past the pin over and over again no matter which way you try to knock it over from.

Read on to the NEXT page for more carnival secrets…