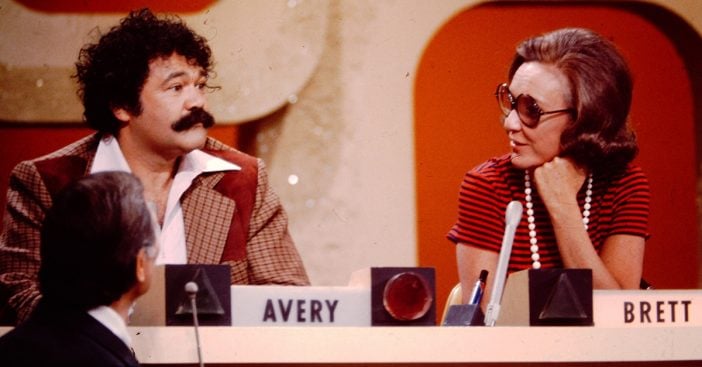 One of the big TV game shows of the 1970s was Match Game, hosted by Gene Rayburn, which featured six celebrity panelists who would try and match answers with contestants. The longer the series went on, the racier — and funnier — the answers would get, but what really drew the audience in was the interplay between the stars, with true standouts being Richard Dawson (before he went on to host Family Feud), Charles Nelson Reilly and Brett Somers.

Interestingly, Brett wasn’t really supposed to be a part of the show in the first place. At the time, she was married to actor Jack Klugman, who was playing Oscar Madison opposite Tony Randall’s Felix Unger in The Odd Couple. In fact, she even had a recurring role on that series as Oscar’s ex-wife, Blanche.

Comments pop culture historian Geoffrey Mark, “Brett Somers was so different from him, because Jack was Jewish from Philadelphia and she was from New England. Brett was sharp-witted, but she wasn’t a beauty. She wasn’t particularly a great actress, but whatever the attraction was, it was there. But by the time The Odd Couple began to be filmed, their marriage was already in trouble. They had two sons and Brett had had a daughter before she married Jack, and there was contention between them about how to raise their children.”

What is Brett Somers Famous for?

Geoffrey points out that there were other problems between them in the form of Jack’s “really large personality quirks. He smoked cigars, he gambled — there was a lot of Oscar Madison in him. It’s why he played the part so well; he wasn’t stretching to play this part all that much.”

When The New Match Game premiered in 1973, Jack was actually ready to be a part of it. In fact, he was on the show’s first and second weeks. “But then,” says Geoffrey, “came a time when either the shooting schedule interfered with The Odd Couple or he wasn’t feeling well and he told the producers, ‘Hey, let my wife do this.’ Brett was currently on The New Perry Mason playing Gertie the secretary. And she clicked on Match Game. After that, Jack was barely on the show.” His loss was definitely Brett’s gain. Although she had been kicking around Hollywood for about 20 years at that point, genuine stardom had eluded her — until Match Game.

Born Audrey Dawn Johnson in 1924 in Canada, she moved to New York City once she turned 18 with the desire to become an actress. Inspired by a character from Ernest Hemingway’s The Sun Also Rises, she changed her name to Brett, attaching her mother’s maiden name, Somers. In New York she met and married Robert Klein, who was definitely not the comedian of the same name. After their divorce — some time after their daughter was born — she married Jack Klugman in 1953, giving birth to their sons Adam and David.

Says Geoffrey, “Once Brett had Match Game and her own income, with her own career going and Jack didn’t have to worry about her, they separated. They didn’t divorce for years, but they stopped living together. They didn’t dislike each other — which is why she appeared on so many episodes of The Odd Couple — but they just didn’t want to live together anymore.” The divorce went through in 1977.

When did Brett Somers die?

As an actress, Brett got her start (as so many did) in different anthology television productions such as Robert Montgomery Presents, Playhouse 90 and Kraft Television Theatre. There were also stage shows like The Seven Year Itch, Maybe Tuesday and Happy Ending and a number of TV guest star appearances beyond The Odd Couple and The New Perry Mason.

“The show in a sense created its own celebrities,” observes A. Ashley Hoff, author of Match Game 101: A Backstage History of Match Game. “Brett actually had an extensive career in theatre and television, but it was Match Game that made her literally a household name. And while Richard Dawson was the most cerebral panelist and the best at the game, people loved Brett’s audacity. She said exactly what she thought, had a forceful personality, but also had a great sense of humor and didn’t mind being the butt of a joke. And in real life she was exactly what you saw onscreen, a funny, down-to-earth person.”

Brett passed away on September 15, 2007 at the age of 83 from a combination of stomach and colon cancer.