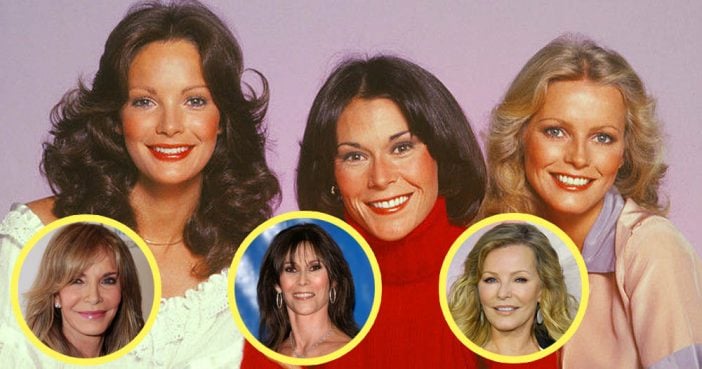 “Once upon a time there were three beautiful girls who went to the police academy, and they were each assigned very hazardous duties. But I took them away from all that and now they work for me. My name is Charlie.”… Did that get you in Charlie’s Angel’s mood? We laid out the entire original cast for you today – see them in their role from the 70s series and now!

On September 22nd, 1976, the world was introduced to Charlie’s Angels. Along with the TV Show we were introduced to three beautiful, highly-skilled detectives tasked to assist their mystery-man financier on a variety of missions. Charlie’s Angels proved so popular with fans that it made numerous stars out of its female-led cast, catapulting actresses like Kate Jackson, Jaclyn Smith, Cheryl Ladd, and Farrah Fawcett to international fame. Over 4 decades since ABC introduced us to ‘The Angles’ we take a look at the cast of the original Charlies Angles TV Show then and now!

The TV show was so successful over the years, running for five seasons and 110 episodes. It was such a hit numerous reboots have been created, even a successful movie franchise and a short-lived TV series in 2011. Now that we’re all up to date, let’s get back to the original cast of Angels…

Kate Jackson began her acting career on the original Dark Shadows TV show and in the 1972 series, The Rookies before she was cast as one of the original Charlie’s Angels on the hit series. Jackson continued to act into the late 2000s but has no credits to her name since a 2007 appearance on Criminal Minds.

Jackson was originally cast as Kelly Garrett (which ultimately went to her co-star Jaclyn Smith), but decided upon Sabrina Duncan instead. The huge success of the show saw Jackson, Smith and Farrah Fawcett-Majors (who played Jill Munroe) appear on the front cover of Time magazine.

In 1976, after Pro Arts Inc. pitched the idea of a poster of Fawcett to her agent, a photoshoot was arranged with photographer Bruce McBroom, who was hired by the poster company. Apparently, Fawcett styled her own hair and did her makeup, without the aid of a mirror. Her blonde highlights were further heightened by a squeeze of lemon juice. From 40 rolls of film, Fawcett herself selected her six favorite pictures, and eventually the choice was narrowed to the one that made her famous. The resulting image of Fawcett in a one-piece red bathing suit which has become the best-selling poster in history.

The Charlie’s Angels series formally debuted on September 22, 1976. Each of the three actresses was propelled to stardom, but Fawcett dominated popularity polls and was soon proclaimed a phenomenon, possibly as a result of the popularity of her poster. In fact, Fawcett’s appearance in the television show boosted sales of her poster, and she earned far more in royalties from poster sales than from her salary for appearing in Charlie’s Angels. Her hairstyle went on to become an international trend, with women sporting a “Farrah-do”, a “Farrah-flip”, or simply “Farrah hair” feathers. Iterations of her hairstyle predominated among American women’s hairstyles well into the mid-80s.

In the spring of 1977, Fawcett left Charlie’s Angels after only one season and Cheryl Ladd eventually succeeded her on the show, portraying Jill Munroe’s younger sister Kris Munroe.

Farrah Fawcett is undoubtedly the epitome of the Hollywood success story. After growing up in a modest home in Texas she ended up becoming one of the biggest, most recognizable stars in the world. She died in 2009.

Shelley Hack was working as a commercial actress through much of the 1970s, but it was a casting call to replace departing “angel” Kate Jackson on the hit Charlie’s Angels that helped Hack become an American star. Hack continued to act until 1997, but she spends most of her time these days behind the scenes as a producer.

Hack and her husband, Harry Winer, are company principals for the production company Smash Media (“Entertainment That Brings People Together”) that develops and produces content for motion pictures, television, and new media. She began her career as a teen fashion model and is also remembered as the face of Revlon’s Charlie perfume from the mid-1970s until the early 1980s.

Cheryl Ladd (one our 50 Fabulous People of the 1970s) became a star thanks to her role as Kris Munroe on the original Charlie’s Angels. Ladd was already working in TV with roles on Josie and the Pussycats and Search. Ladd is still acting today, with a notable appearance on the highly acclaimed The People v. O.J. Simpson: American Crime Story.

Out of all the “angels” who came out of the original series in 1976, nobody was more well-known than Jaclyn Smith, who became an international star thanks to her role as Kelly Garrett. Smith never really found huge fame after Angels, jumping from show to show and TV movie to TV movie. Still, for several bright, shining years, Smith was maybe the biggest female actress in the world.

David Doyle played the original John Bosley on the 1976 Charlie’s Angels and stayed on the show through its entire run. Doyle started his acting career in 1959 and continued to work until he passed away in 1997.

The Freaky Friday comedienne appeared on Charlie’s Angels as a professional golfer. Seems simple enough – nope. She’s also dodging several people attempting to kill her, and that’s where Sabrina, Kelly, and Jill come in to protect her. Curtis is currently on hiatus from acting and is a blogger for The Huffington Post.

Curtis is the daughter of the actress Janet Leigh and actor Tony Curtis. She is married to actor, screenwriter, and director Christopher Guest.

Basinger had a cameo appearance on a Season One episode of Charlie’s Angels. Her role as Bosley’s secretary was one of her first TV gigs! The movie star won an Oscar in 1997 for her leading role in L.A. Confidential. She’s appeared in a slew of blockbusters, including Batman, 8 Mile, and most recently, 50 Shades Darker.

Tom Selleck (as a Surgeon)

Selleck appeared on the Angel’s spectrum as a surgeon and love interest for Kelly. He’s best known for his roles on Magnum P.I. and Friends. Today he stars on the CBS police drama Blue Bloods.

Did you know that famed TV actor Patrick Duffy starred on Charlie’s Angels way back in the beginning of his career? Nope. We didn’t either. But we know now that his role helped start a hugely successful career that’s still going today. From hits like Dallas to Step by Step, Duffy is still going strong today.

Sadly, did you know his parents were murdered in cold blood one night in their owned and operated tavern (Montana). Duffy reflects on the tragedy.

Famed character actor Robert Loggia had a brief stint on Charlie’s Angels back in 1976, but by that time, Loggia had already enjoyed a long career in entertainment. He’d later receive numerous acting nominations for shows like Mancuso, FBI and movie JaggedEdge, along with memorable roles in Big, Scarface, and Independence Day. Loggia passed away in 2015 at the age of 85.

In one episode, the Angels go undercover at a winery to uncover its missing owner’s whereabouts. They encounter a worker at the vineyard with plenty of information to spare: enter Tommy Lee Jones. The Academy Award winner has quite an impressive film resumé to boast. His film credits include the Men in Black series, Jason Bourne, Coal Miner’s Daughter, No Country for Old Men, and The Fugitive – for which he won his Academy Award – to name a few.

Check out our video about all the Behind-the-Scene action of Charlie’s Angels:

Click for next Article
Previous article: O.J. Simpson Makes A Stunning Confession To Book Publisher
Next Post: Tom Selleck Addresses The “Ghost” On The Set Of “Three Men And A Baby”