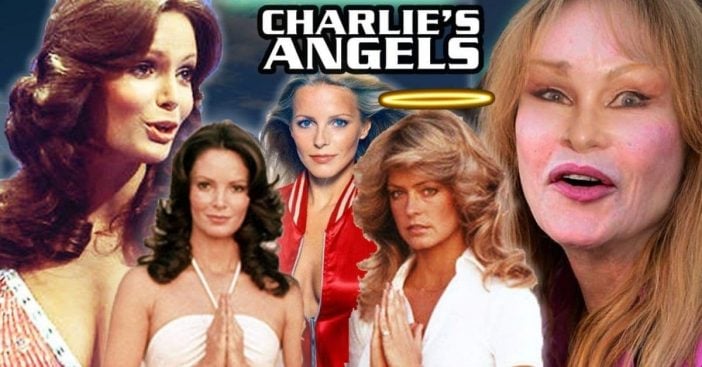 Who doesn’t want to watch three bombshell beauties fight crime and solve mysteries? That opening theme was so memorable, I can still hear Charlie in my head; “Once upon a time, there were three little girls who went to the police academy…”

Although many people saw the show as just ‘Jiggle TV’ with a focus on sex appeal, those angels showed off their acting chops, and with interesting and clever plots, excellent guest stars, and gorgeous angels, what’s not to like. Today, we’re taking a look back at the incredible cast of Charlie’s Angels and what they got into after retiring from undercover investigations. Now, we need to revisit some angels.

The biggest reason for Charlie’s Angels’ massive success was Farrah, her feathered hair which never lost its curls, her dazzling smile, her magnetic persona. Only Farrah could reduce the other lovely angels to the background. The often-undercover & athletic Jill Monroe was proficient in both handguns and self-defense. We were crushed when Farrah decided to leave the show after season one, but so thankful she’d return on occasion. Her absence was explained by saying Jill became a professional driver on the Grand Prix circuit in Europe.

Prior to all that, Farrah was a model and commercial actor in LA, before a photoshoot in a red one-piece swimsuit changed everything. You know the one; it sold over 12 million copies worldwide, and I’m sure was on some of your walls. The posterizing success led to her first film role in the science-fiction film Logan’s Run (1976). She also guest-starred alongside her husband Lee Majors in his hit show, The Six Million Dollar Man.

She and Lee were also frequent tennis partners against producer Aaron Spelling, who would remember Farrah’s strong backhand when he cast her as Jill Munroe in Charlie’s Angels. Although nominated for 6 Golden Globes, she never did win, and her post-angels films like 1980’s Saturn 3, usually got crushed by the critics. But Farrah was once-again phenomenal in 1984’s TV movie, The Burning Bed.

Fawcett had serious troubles in her personal life after splitting with Lee Majors, she had a son with Love Story-actor Ryan O’Neal. And after finding him in bed with another woman, Farrah ended the relationship. Later Ryan’s daughter Tatum O’Neal, alleged that Ryan physically abused Fawcett saying, quote, “He beat her up”. Horribly, Farrah immediately began a relationship with Canadian filmmaker James Orr, who was later arrested and convicted of beating Fawcett during a 1998 fight.

Fawcett was sadly diagnosed with cancer in 2006 and after actively seeking experimental medical procedures, she passed away in 2009, but the world will forever remember the vibrant and beautiful, Farrah Fawcett. She truly is someone we can never forget!

The founding employee of the agency, Sabrina was the cool, smart leader of the Angels and with her dynamic personality, she grabbed our attention. Although Farrah was the superstar of Hollywood, Kate was the star of the Angels. Kate left the show after season 3, and the program suffered because of her departure. Kate got her start in Hollywood with 71 episodes of the gothic soap opera Dark Shadows. Then she had a series starring role in 1972’s The Rookies.

Beyond her Angels success, she landed yet another starring role in 1983’s Scarecrow and Mrs. King. She has not appeared in film or television since 2009, when she also sued her financial advisor, claiming his actions cost her more than $3 million and brought her to financial ruin. Jackson is a cancer survivor, having battled breast cancer twice. To this day, she continues to be a very vocal advocate for early detection and women’s health. At 72 years old, We sincerely hope she’s past those health scares and doing well.

The only ‘Angel’ who appeared for the entire run and Jaclyn used these years to grow into a lovely, elegant, and focused actress. One of her first gigs was as a “Breck girl” for Breck Shampoo in 1971. Then she teamed up with Farrah Fawcett for the first time, as a spokesmodel for Wella Balsam shampoo.

Following the cancellation of Charlie’s Angels, Smith donned the elegant attires of Jackie O for the television bio-pic of the first lady. Jaclyn continued with TV movies and small roles in the ’90s until she got a recurring role in 2002 in the Craig T. Nelson-led series The District. She even reprised her role as Kelly Garrett in the newest Charlie’s Angels film in 2019. Outside of acting, since 1985, Jaclyn has been working on her fashion empire. Today at 75, she’s also added a new wig collection to her fashion line; what can’t she do?

Who could replace Farrah? Literally no one, but Cheryl Ladd took on the challenge entering as Kris Munroe in season 2, the younger sister of Jill. And Cheryl really did a remarkable job, adding grace and originality to the show, staying until its conclusion. Cheryl originally wanted to be a singer and got her start in the industry as the singing voice for Melody in the popular cartoon, Josie and the Pussycats. And if you’re a fan of that cartoon, check it out along with the other Best Cartoons of the 1970s!

She used her Angel success to once again push her music career forward, achieving a gold record and even performing the national anthem at the 1980 Super Bowl. Cheryl is still acting, but mostly in TV movies like the 2020 Christmas Unwrapped. Today at 69 years old, Cheryl has been married to music producer Brian Russell since 1981 and is also a celebrity ambassador for the child abuse prevention and treatment non-profit Childhelp.

Shelley replaced Kate Jackson’s ‘Sabrina’ for Season 4, and really made her character into a cultured, tough, and gorgeous replacement. Shelley began her career as a teen fashion model and Life soon proclaimed her, quote, “one of the million-dollar faces in the beauty industry.” Charlie’s Angels was her big Hollywood break, and after initial ratings were good, they began to decline so much so, that the studio decided another replacement would help Season 5, and Shelley, being the newcomer was cut from the show.

She was then a lead in the 1983 series, Cutter to Houston but the show didn’t last. One more series lead in 1986’s Jack and Mike would putter out and not be renewed for season two. She retired from acting in 1997 and went back to school to begin affecting the world of politics, specifically in other countries like Bosnia. As of today at 73 years old, she and husband Harry Winer are Co-Presidents of the production company Smash Media. The couple has one daughter born in 1990.

Tanya entered the show for its 5th & Final season and made Julie a tough, sexy, street-raised fighter. With Tanya’s addition, the producers finally got the brunette, blonde & red-head set-up they had always wanted since its conception. Tanya got her first role in the 1975 horror flick, The Last Victim. She was then chosen from some 2,000 candidates to replace Shelley on Charlie’s Angels in hopes that it would help save the show from cancelation; and again, despite initial hype over Tanya’s appearance, the season received dismal ratings, and the show was canned.

Tanya enjoyed a great career, including a starring role in 1982’s epic film The Beastmaster. She was featured in a nude pictorial in Playboy to help promote the movie, appearing on the October 1982 cover. Her sex appeal continued as a Bond girl in 1985’s A View to a Kill. Tanya enjoyed a resurgence in the 2000s as Midge in That ‘70s Show. but left the series because her husband became terminally ill. Today in her mid-60s, she’s living in Hollywood Hills but hasn’t acted since 2005. Sadly, Roberts passed away on January 4, 2021. She suffered from a urinary tract infection causing a blood infection, made worse by hepatitis C. Initially, outlets reported her death as arriving a day before, when her partner made a final visit, restricted from the COVID-19 pandemic.

Bosley was crucial to the show, as the present & helpful assistant to the mysterious Charlie. His chemistry with the angels, especially the original three, was part of the show’s universal popularity.  David had quite a career, dating all the way back to 1955. But it was the ’70s that brought him fame, along with his Bosley, he landed film roles in 1976’s Vigilante Force and then the following year Capricorn One.

Younger generations were able to enjoy David’s raspy talents as he voiced Grandpa Lou Pickles on the popular Nickelodeon cartoon Rugrats from 1991 until his death in 1997.

The mysterious man in charge, and although he was never actually seen on-screen, his voice was a huge aspect of the show. I mean, they were Charlie’s angels after all. Forsythe’s first break was in 1955’s Hitchcock-directed picture, The Trouble With Harry. And it was smooth sailing from then on, even achieving his own show The John Forsythe Show, a decade later.

But he may be best known for his Blake Carrington on the prime-time soap Dynasty. Do you remember him in the hit show? Check out our Dynasty deep dive video for more! We last heard from John when he voiced Charlie in the film Charlie’s Angels: Full Throttle in 2003. Sadly, we lost John in 2010 at the age of 92 after years of battling cancer.

Can you believe it’s been over 40 years since this amazing cast dominated TV? So much that it was a top ten hit in the Nielsen ratings for its first two seasons.  Who was your favorite Angel from the 5-season run? Do you remember a great episode vividly? Did any of the spin-off films do it justice? Let us know in the comments, we wanna hear from you!