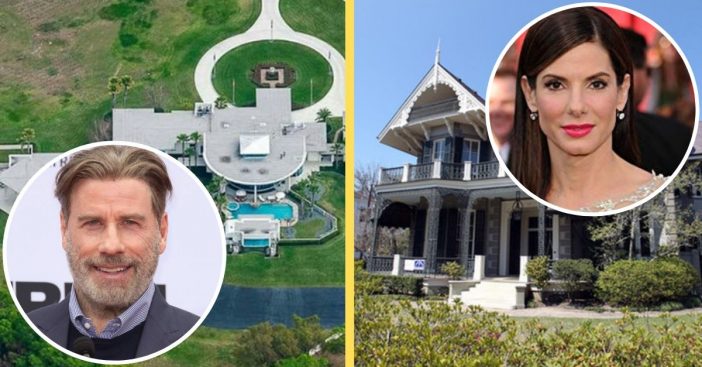 We always assume that big stars live in Hollywood or somewhere in the California area. That isn’t entirely true! While many famous celebrities have houses in multiple locations, there are actually a number of them who primarily live pretty far away from Hollywood.

Sandra Bullock reportedly prefers to spend most of her time at her Victorian-style New Orleans home when she’s not busy with movie roles. What a stunning home!

When the two aren’t off preparing for a movie role or on a country tour, the two can probably be found in their Franklin, Tennessee ranch.

While Matthew McConaughey has a house in Malibu, he splits his time evenly between that house and his other home in Austin, Texas (pictured above).

The country couple has settled down in an adorable home in Franklin, Tennessee which is just outside of Nashville.

This is yet another singer who calls Tennessee her home (seeing a pattern yet?) She actually just sold this absolutely gorgeous house located in Hendersonville, but she does own a farm outside of Nashville.

Oprah has homes in every popular home location you can think of, but her most beautiful home is probably this one located in Maui. Absolutely stunning!

Read onto the NEXT page for more stunning celebrity homes that aren’t located in Hollywood!

Page Page 1 of 2
Previous article: Did Gwyneth Paltrow Violate Her Daughter’s Privacy? See The Screenshots Of Their Messages
Next Post: 21 Of The Best Drive-In Restaurants Still Open In The United States