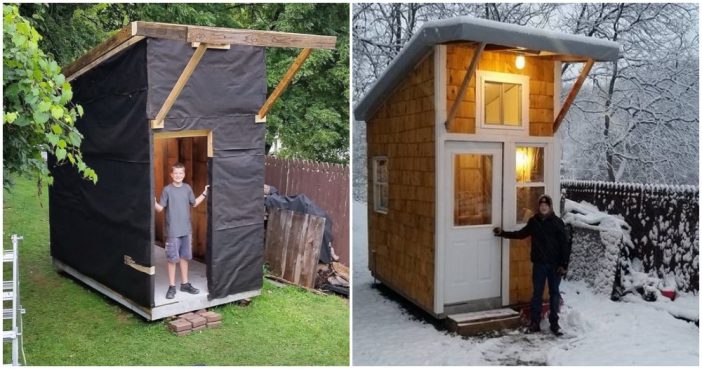 As the trend of minimalism continues to expand and engulf more aspects of society, tiny houses grow in prominence over the average $300,000 houses. Not only are they affordable, but also give the owners an amazing sense of freedom to travel around with ease and no tension. A lot of grown-ups who are in the midst of a house buying process, think of a tiny house as a viable and economical option. So, does it come as a surprise that a 13-year old caught up on this idea and built a tiny house all of his own?

Luke Thill, a 13-year old resident of Dubuque, Iowa came up with the most productive way to while away the summer break days. He decided to build an 89-square feet home right in his parents’ backyard. Here goes the inspirational story of a 13-year old homeowner!

Thill went to on to YouTube to ponder over multiple tiny home videos. These videos crystallized the idea that was shaping in his mind about his “starter home.” But before he could go ahead, he needed his dad approval. So, off he went to Greg Thill. Luke’s father was totally on board with his son’s incredible idea. But, he did jot down certain norms. Luke was supposed to raise the money for it, build it and then own it!

Hence, started Luke’s journey of doing odd jobs over summer to raise the fund for his dream project. He cut lawns mostly and gathered and saved every penny he could. Plus, he also bartered a few services in exchange for electric wiring and carpeting. He would go clean the garage of his electrician neighbor or go cut a lawn for a Scout leader who helped put a carpet in his loft.

In a year and a half, Luke had the right amount to make his dream a reality. With $1,500, he managed to build a tiny house of his own.

But like they say, it is the journey that matters more than the destination. Luke’s process of building his tiny home, guided by his father, was a roller coaster ride. Although Greg Thill always had his son’s back, it was Luke who took the majority of the decisions. He saw to it that he stuck to the budget and also dealt professionally with the adults who were going to help him. Through a lot of YouTube tutorials, he learned the ins and outs of the wiring and framing structure of the house. What he did next is just so impressive.

Previous article: 4 Of The Best Ways To Save Money On Your Household Bills
Next Post: April The Giraffe Is Pregnant Again And We Are So Excited!