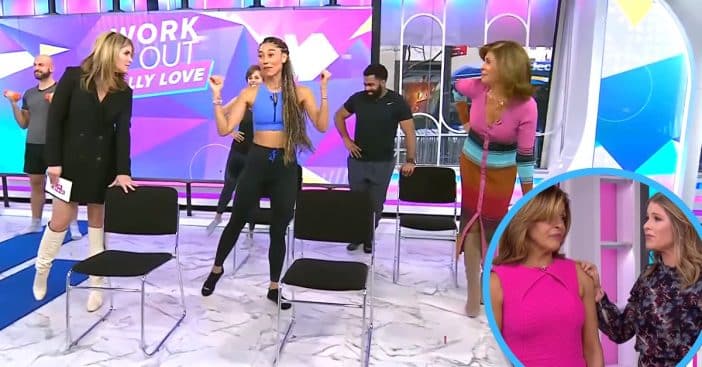 Television is usually a viewing experience to be watched sitting down. But for a recent episode of Today, hosts Hoda Kotb and Jenna Bush Hager had to get up and go, as one segment in particular focused on fitness. However, Hoda was quick to point out to Jenna she should sit this one out all because of her wardrobe.

Less than a week ago, Jenna and Kotb were joined by Ally Love, CEO of Love Squad, a business that describes itself as “a wildly powerful community emboldening women to unleash their inner boss and reclaim their power by facilitating educational and honest conversations.” So, why did Hoda silence Jenna’s inner boss on live TV?

On Thursday, Peloton trainer Ally Love joined the Today crew to teach them about exercise, with an emphasis on smaller moves that have a big impact; keep the fitness journey in bite-sized pieces and it doesn’t feel as intimidating. The two hosts got to participate in a practical demonstration, with Love setting up chairs not to sit in but to do exercises typical of the ballet barre while Love gave advice.

The first one, though, was not accommodating to Jenna and her wardrobe. First, they had to lean lightly on the chair and extend one leg up and out to the side. However, as Jenna, wearing a dress that sat just above the knees, tried to comfortably maneuver her leg, Hoda advised she “shouldn’t be doing” this because Jenna “had nothing on.”

The power of knowledge

There’s even more to this than warning a friend wearing a relatively high-cut dress. Jenna admitted to the Today squad that her wardrobe does not include underwear, so Hoda was saying a lot when she said Jenna “had nothing on.” Jenna explained she thinks going without underwear “makes a more pretty silhouette,” adding, “I also think you don’t have to pack as much. There’s a lot of pros to it.” Mom might not be beyond thrilled and Hoda would agree.

In Hoda’s view, sure, it cuts back on what a person has to wash – fewer pairs of underwear – but then that is offset immediately by the need to wash whatever else was worn that day “over and over.” But Hoda won’t have to worry about that since it’s primarily Savannah Guthrie that Jenna shares clothes with.

Check out some of the fitness tips in their video below!

Click for next Article
Previous article: ‘In The Heat Of The Night’ Cast Then And Now 2023
Next Post: AI Recreates ‘Family Guy’ Into A 1980s Live Action Sitcom