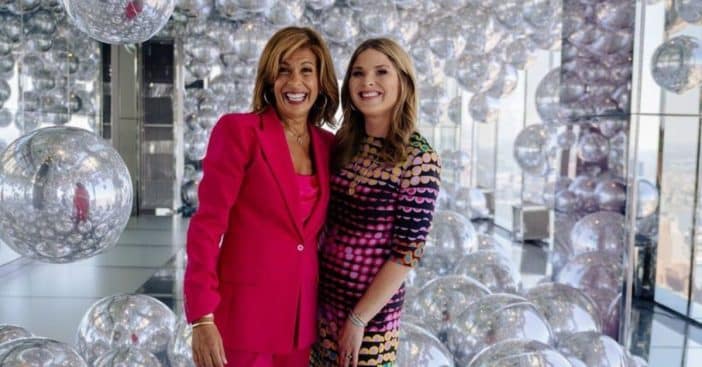 Despite anchoring Today with Hoda and Jenna and being practically best friends in real life, Hoda Kotb and Jenna Bush Hager still do not know everything about each other. The co-hosts, who have been together since 2019, are constantly discovering new things about one another.

Recently, things got a little interesting on an episode of the show when the former first daughter confessed that she “never wears underwear,” after her co-host, Kotb, made the revelation in front of a live audience.

Jenna Bush was shocked as Hoda Kotb made the funny revelation

Hoda Kotb thrilled the audience as well as viewers on that particular episode of the show by sharing the shocking revelation about Jenna Bush. The topic emerged after they shared a dressing room ahead of the live show.

Hoda revealed that when she noticed Jenna wasn’t wearing panties as they were changing clothes, she was amazed and speechless about the discovery. “I was a little surprised,” Hoda stated, “because Jenna and I know a lot about each other.”

Slightly embarrassed by the event, Jenna scolded Hoda and joked about how her mother would react to the news. “You promised me you wouldn’t do this! There’s a lot of people here!” she said jokingly to Hoda. “I’m sure my mom has never been more proud.”

Jenna further explained that she goes without underwear mostly because it makes it easier for her to change outfits, a claim supported by the show’s wardrobe supervisor. “I think it makes a more pretty silhouette!” she revealed, “I also think you don’t have to pack as much. There’s a lot of pros to it!” However, the co-hosts had differing views about not wearing underwear.

Hoda agreed with the former first daughter that not wearing underwear “actually does make life a lot easier,” but went on to argue that “The downsides? It’s a lot of washing of clothes, over and over.”

However, Jenna doesn’t seem to mind since she doesn’t share her wears with anybody except fellow TODAY show host Savannah Guthrie, whom she claims to have “stolen” some clothes from. “I do steal Savannah [Guthrie]’s pants on occasion,” Jenna admitted before turning to Hoda and asking, “And I do want to borrow that red suit of yours. Can I?”