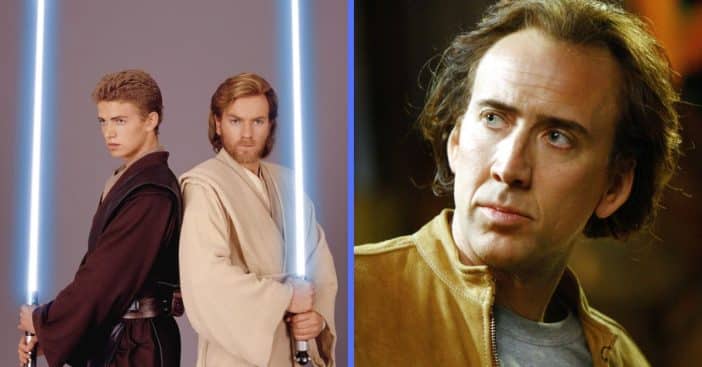 Starry-eyed Jedis first visited a galaxy far, far away in 1977, bit the Star Wars franchise has been alive and well in the decades since. Between his time in National Treasure, plus films like Next, Nicolas Cage is no stranger to adventure or sci-fi, making him and Star Wars a natural match, right?

Not quite, the actor confirmed. Star Wars has had numerous entries, from sequels to prequels, books and yet another new series called The Mandalorian starring Pedro Pascal. But Cage, given his choice, has his eyes fixed on the final frontier from a different space craft.

Nicolas chooses a side in the ‘Star Trek’ vs. ‘Star Wars’ debate

With Cage so unafraid of being expressive and colorful in his films, fans want to see what he could do in any one of the latest Star Wars projects. But the Force isn’t so strong with this one; he’d rather Scottie beam him up than go pod racing.

RELATED: Star Trek vs. Star Wars: The Space Battle That Will Never End

Pascal voiced the idea of recruiting Cage for The Mandalorian, but Cage admitted he’s “not really down.” That’s just honest brand loyalty. After all, “I’m not in the Star Wars family,” Cage confirmed. “I’m in the Star Trek family.” In fact, even while promoting his new Western, The Old Way, Cage found time to tell anyone who’d listen, “Trekkie, man. I’m on the Star Trek Enterprise. That’s where I roll.”

To boldly go to a galaxy far, far away

Star Trek and Star Wars are irrefutably important to many people and have been since day one. Both have been unifying just as much as the debate between them has been divisive. It wouldn’t be the first time pop culture inspired people’s career paths. It continues to sway Cage’s too. “I grew up watching [William] Shatner,” reflected Cage.

Then, when Chris Pine took up Shatner’s role as Captain Kirk, Cage thought he “was terrific in the movies. I think the movies are outstanding. I like the political and the sociological [messages]. To me, what science fiction is really all about and why it’s such an important genre is that really you can say whatever you want, however you feel. You put it on a different planet, you put it in a different time or in the future, and without people just jumping on you, you can really express your thoughts like Orwell or whomever in the science-fiction format. And Star Trek really embraced that.”

Which franchise do you want to see him in?

RELATED: Do You Remember When Nicolas Cage And Cher Were In A Romantic Comedy?

Click for next Article
Previous article: Red, Kitty, And Bob Reunite In ‘That ’90s Show’ Sneak Peek
Next Post: Meet ‘Step By Step’ Star, Patrick Duffy, And His Two Sons, Padraic And Conor