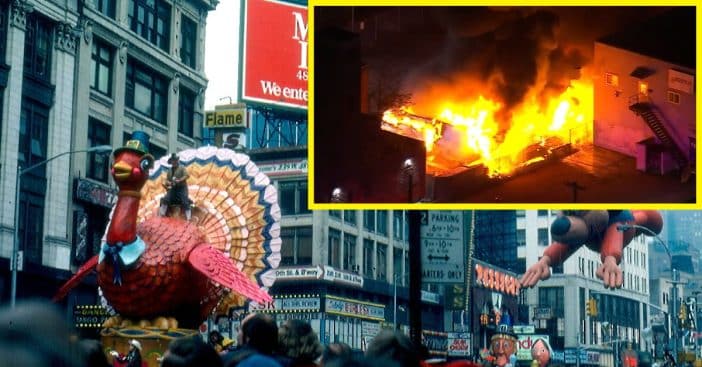 No Thanksgiving is quite complete without the Macy’s Thanksgiving Day Parade, which starts at West 77th Street & Central Park West. But plenty of important elements actually stay just over the border in New Jersey. Trailers used for celebrities participating in the parade caught fire this week, just days before the parade.

At 6 am on Monday, a groundskeeper first saw a fire burning through the property that housed in South Kearny; they were located along the 100 block of Lincoln Highway. Hudson County firefighters responded and subdued the fire that blazed throughout the property. Despite its scope, no injuries were reported.

9 am on Thursday is fast approaching and the upcoming Thanksgiving Parade faced a major setback that thankfully did not lead to any grave injuries. Chrisel Flores, booking agent for Royal Buses, announced this morning, “Today is a devastating day, the fire destroyed seven of our buses.” Royal Buses produces trailers for television and movie productions.

RELATED: Grossinger’s Resort, The Hotel That Inspired ‘Dirty Dancing,’ Was On Fire

That list also includes national events, Flores notes, especially some big ones in New York. The Queen of Christmas herself Mariah Carey counts on these trailers to get hair and makeup done ahead of performances. “We provide trailers for everything, the Macy’s day parade, the Times Square ball drop, the (Rockefeller Center) tree-lighting,” Flores lists. So, what does this mean for the parade?

How this will affect the parade

According to Flores, all seven of the trailers that were destroyed were supposed to be used for stars participating in the Macy’s Thanksgiving Day Parade. Efforts to put out the fire were temporarily slowed when firefighters had to cut through a locked chain link fence. Fortunately, Royal Buses has a second location with backup trailers that can replace the ones taken out of commission.

By time of writing, there is no official word on where the fire started; Royal Buses had actually just been working on constructing a studio in a motor home and another studio inside a building. Once buses from elsewhere are brought over, the festivities should be able to continue as planned. However, that will have to be done quickly since Royal Buses says they were supposed to start seeing official parade-related use this Tuesday.

Footage from the affected area can be seen in the video. To all readers, have a happy and safe Thanksgiving.

Click for next Article
Previous article: Mariah Carey Will Open For Santa During Macy’s Thanksgiving Day Parade Performance
Next Post: Pink Shares A Major Wardrobe Malfunction Right Before The AMAs