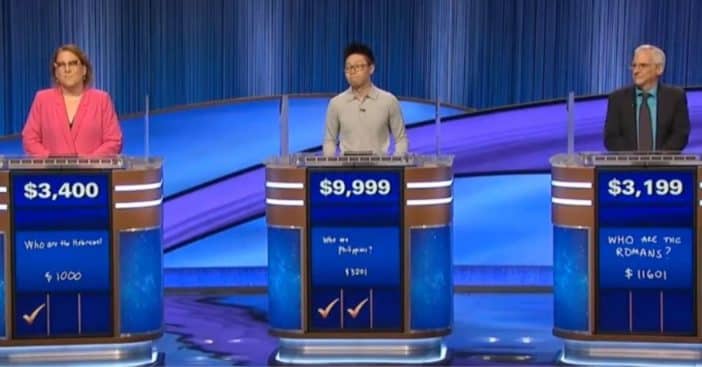 Since its inception, Jeopardy! has presented contestants with prompts from numerous categories of trivia, from geography to literature. Generally, correct responses are straightforward. “The current Jeopardy! host: Who is Ken Jennings?” But recently, a prompt related to the Bible sparked a passionate debate among Jeopardy! fans – and for a surprising reason.

Jeopardy! has a worldly slew of questions and answers, so the subject matter actually isn’t uncharted territory for the game show. The religious nature of the question wasn’t an issue with viewers. Rather, it’s that it’s associated with subject matter that’s debated by Bible scholars and religious scholars of other faiths to this day – and the accepted answer might have cost a contestant big.

Some members of Jeopardy! royalty have been competing against one another lately, and Wednesday’s final round saw Amy Schneider, Andrew He, and Sam Buttrey battling for victory that evening. One clue read, “Paul’s letter to them is the New Testament epistle with the most Old Testament quotations.” Buttrey answered, “Who are the Romans,” while He went with “Philippiaes,” in reference to book of Philippians. But it was Schneider’s “Who are the Hebrews” that was deemed correct by Jennings.

So, Schneider got the points but viewers took issue with the final result. “This is a terrible clue,” one viewer objected, arguing, “The authorship of Hebrews is disputed. Not counting Hebrews, Romans has the most quotations. Sam was robbed.” The debate quickly grew beyond the realm of game show clarity into theological history.

To keep things running smoothly, Jeopardy!, like other game shows, has a set of rules it and participants abide by. In the past, these have come under debate, like when people inconsistently lost because of their handwriting. Now, the nuanced topic of Bible studies has stirred another Jeopardy! debate. That’s partly because even outside the game show, it’s hotly debated; scholars have differing views on how involved Paul was in this particular gospel, and a theology professor and priest took to social media to say, “Hebrews has the most OT quotes of any NT letter. It was historically attributed to Paul.”

Again Ken is a super host…👍

The Tournament of Champions continues with a very tense game; remember, it’s the best of the best against one another. To qualify, they had to win so many games consecutively, so everyone has already proven their worth before the special games began. Buttrey’s recent victory over Schneider had fans even debating if Schneider deliberately threw the game. Relating back to questions of faith, one even theorized, “I think there was a silent pact to make it last seven games …or it was discovered that Sam was right on the final question about the Bible and he was owed a win.”

RELATED: Ken Jennings Reflects On The Role Of Faith In His Rise To ‘Jeopardy!’ Fame