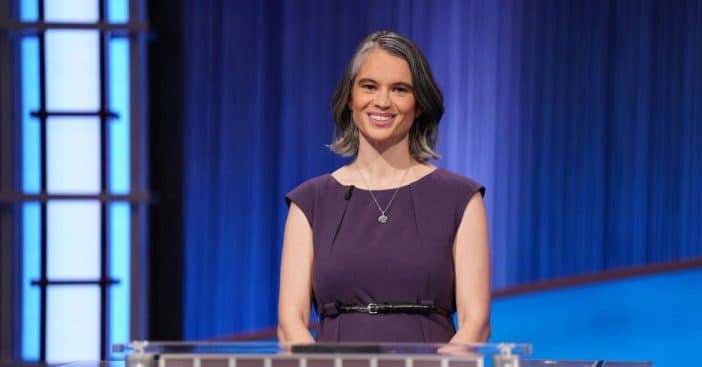 The current Jeopardy! champion is Megan Wachspress. She has been having some great luck on the show, with other contestants she’s facing messing up big time. For instance, during one episode it looked like contestant Sadie Goldberger was going to beat Megan.

During Final Jeopardy, the clue read “Congratulating her on the 1869 release of her biography, Frederick Douglass wrote, ‘I have wrought in the day- you in the night.’” Megan answered correctly but it still looked bleak for her if Sadie was going to answer correctly.

Megan Wachspress has been so lucky on ‘Jeopardy!’ so far

Unfortunately for Sadie, her handwriting was a bit messy and while she seemed to have the right answer, it wasn’t acceptable. Megan ended up continuing on. In another episode, all of the contestants, including Megan, got the Final Jeopardy wrong or just didn’t answer and didn’t wager anything.

While contestant Tory Leviton could have passed Megan if he answered correctly or wagered differently, he ended the game with $200 and Megan had just $401. This gave her a five-day total of $52,002. Reportedly that is “less than half as much as any other five-day champion this year.”

Tune in to Jeopardy! to find out if her luck continues.

Click for next Article
Previous article: John Wayne Insulted One Iconic Clint Eastwood Film
Next Post: The Trick Clint Eastwood Has Been Using For Decades To Ease Anxiety