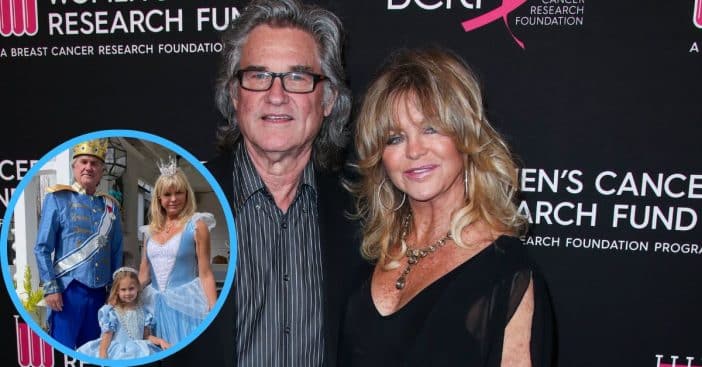 It was a birthday fit for royalty. Within their blended family, actors Goldie Hawn and Kurt Russell are the parents of Oliver and Kate Hudson and Wyatt Russell. Kate and partner Danny Fujikawa had their first daughter, Rani, on October 2, 2018. It’s hard to believe, but Rani is already four and she was joined by Cinderella, played this weekend by Hawn herself.

Russell is not biologically related to Kate but the Almost Famous star has called Russell a father figure who was there when actor Bill Hudson was not. Russell proves he deserves his title again and again, including this past weekend when he played the role of the dashing prince for Rani’s special day.

Kate shared news of the happy occasion celebrating Rani with an Instagram post earlier this week. “Our dreamy girl is 4 years today,” she announced. “Happy Birthday to Rani Rose! Rani fills our hearts so full of love as she meets everyday with enthusiasm, beauty and humor. We partied hard today… the princess way #HAPPYBIRTHDAY.”

Indeed, as the accompanying photos reveal, it was a certifiable princess party fit for royalty. In some shots, Rani wears a dress like that of Cinderella, matching Hawn, while Russell is decked out in a regal blue suit. Eventually, Rani switches fairytales and wears the gown worn by Rapunzel in Tangled. Many people have crowns and big smiles to match the festivities!

Example of a blended family

The entertainment business is something of a family affair, as Kate comes from an acting background while Danny is a musician and co-owner of a record company. Then, of course, there are grandma and grandpa, whose love story is shown across the decades from Overboard to The Christmas Chronicles. In an industry where breakup announcements are just as frequent as new trailer drops, however, the blended Hawn-Russell family stands apart.

Hawn has not actually played Cinderella in her films – though she has been Mrs. Clause – but she’s still been balancing work and family time. Her most recent credit was 2020’s The Christmas Chronicles 2. Russell’s filmography looks similar, though he did add F9 and What If…? to his resume, along with an unnamed Monsterverse series. In the meantime, their social media pages have plenty of candid family photos the fairy godmother herself would hope to bippity boppity boo into existence.