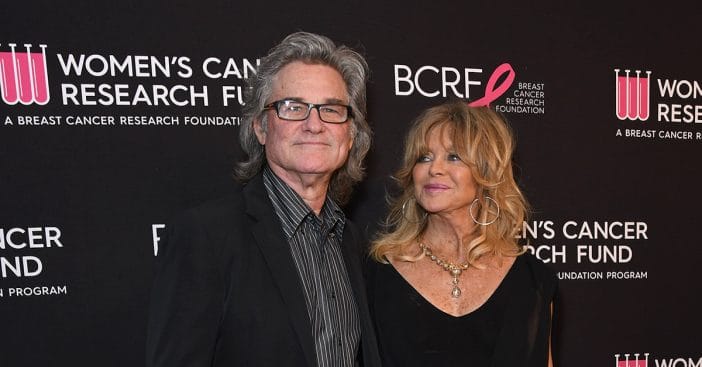 The elderly but young at heart Goldie Hawn and Kurt Russell gave us couple goals in their photos from their vacation on the Greek Island of Skiathos. Goldie, 76, and Russell, 71, are still very much in love with each other after 38 years together, despite not getting married. The lovebirds spent their time on vacation enjoying each other’s company and serving us adorable photos from Greece.

The Snatched actress was spotted strolling on the island in a white smock dress, matching leggings, and a gray espadrille; alongside Kurt in a gray t-shirt, shorts, and pair of sandals. People also reported that they were spotted relaxing on a boat after, with Goldie looking sexy in a black one-piece with a plunging neckline and Russell shirtless in a colorful swimming trunk.

Hawn’s daughter, Kate, told People how admirable she thinks the couple is and how she sees them as a source of inspiration for long-lasting love. The two “complement each other so well,” Kate said. “Mom is kinetic, and she is a butterfly. And Pa likes his family and his home. But when they’re together, it’s so powerful.”

RELATED: Kurt Russell and Goldie Hawn Still Put Family Above Everything Else In Life

“You and Pa have been together for so long and sometimes I look at it and I’m like, How do you guys do it?” Kate added, talking to her mother. She also confessed to seeing her mother’s relationship with Kurt as the goal she wishes to replicate. “I’m still working on that. Living up to Hawn and Russell’s relationship is really the goal. Just the fact that they’ve been able to maintain a unit for all of us, in times of turmoil, they really are the center of all of our lives.”

Goldie and Kurt spend quality time with their family

The couple has lovely kids and grandkids with whom they love spending quality time. The couple raised four children together: Kurt’s son, Boston; Goldie’s Oliver, and Kate and Wyatt, who they had together.

“When we were kids, and we would go on road trips, or we would travel, we had each other, Uno and any toys. I  remember at one point, we got really into playing jacks. It’s funny, because it forced us to really sort of be imaginative and connect. It’s one of those things that I think are really amazing things about technology, but I just don’t want to lose that with my own kids, the importance of putting all that away,” Kate told People. “When kids are bored, they think of the most amazing things to do. My mom used to say that.”

A friend told Closer Weekly about how much the couple love and attend to their grandchildren, which include Kate’s three children, Ryder, Bingham, and Rani; and Oliver Hudson’s trio, Wilder, Bodhi, and Rio. “They probably see Kate and Oliver’s kids the most, because they live closer but don’t let a lot of time pass between visits with all their grandchildren. They don’t take a moment with them for granted,” the friend said.

Click for next Article
Previous article: Nice Neighbors Show Up To Help One Dad Mow His Lawn
Next Post: Joy Behar Talks About How Much ‘The View’ Has Changed Over The Decades