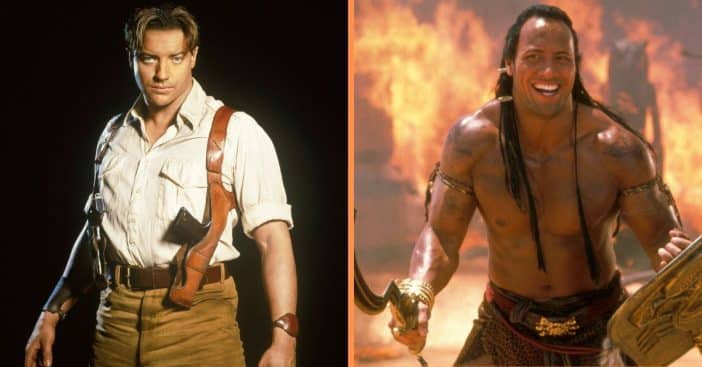 It may seem natural today to see Dwayne Johnson in various comedic and action-packed roles, but he attributes a lot of that success to Brendan Fraser. Fraser has just made a big step in his Hollywood comeback and when it was met with enthusiasm by audiences, Johnson joined in the cheers to support his colleague and friend.

Fraser further cemented his place as an action hero in the sequel to 1999’s Mummy with The Mummy Returns (2001). This time, he was facing off against a new threat played by Johnson. As Johnson tells it, Fraser played a pivotal role in getting him in the door and generating the momentum his career has enjoyed since. See his heartfelt Twitter dedication to Fraser here.

Man this makes me so happy to see this beautiful ovation for Brendan. He supported me coming into his Mummy Returns franchise for my first ever role, which kicked off my Hollywood career. Rooting for all your success brother and congrats to my bud Darren Aronofsky. #TheWhale 👏🏾 https://t.co/SNBLPHHmEZ

Fraser has been returning to the spotlight recently, with his most anticipated project being The Whale. When it premiered at the Venice Film Festival, it – and he – received a standing ovation. News of this warm reception circulated online and caught Johnson’s attention, who shared the video and some words of appreciation for Fraser.

“Man this makes me so happy to see this beautiful ovation for Brendan,” he wrote. “He supported me coming into his Mummy Returns franchise for my first ever role, which kicked off my Hollywood career. Rooting for all your success brother and congrats to my bud Darren Aronofsky.”

The Mummy Returns sees Fraser’s Rick O’Connell settled down with a wife and son, and maybe not so settled down after all between exploring tombs and encountering ancient, cursed relics. The sequel netted $23.4 million on its opening day alone and $68.1 million its opening weekend, the most profitable opening weekend only behind The Lost World: Jurassic Park at the time. Reviews were mixed and some cast members suffered injuries and food poisoning, but the series kept enough support to later generate The Mummy: Tomb of the Dragon Emperor (2008). A year later, Johnson reprised his Mummy role for The Scorpion King, continuing what would become a prolific film career after he’d been primarily known exclusively for wrestling.

Fraser’s acting career took an almost opposite trajectory as he faced personal and professional challenges, everything from alleged assault to divorce to ostracism. He’s been gradually returning to the industry in earnest, in a comeback affectionately dubbed the Brenaissance, and it seems fans and colleagues alike couldn’t be happier.

Click for next Article
Previous article: Police Officers Escort Their Late Colleague’s Daughter To First Day Of Kindergarten
Next Post: Why John Lennon Refused To Listen To His Own Music