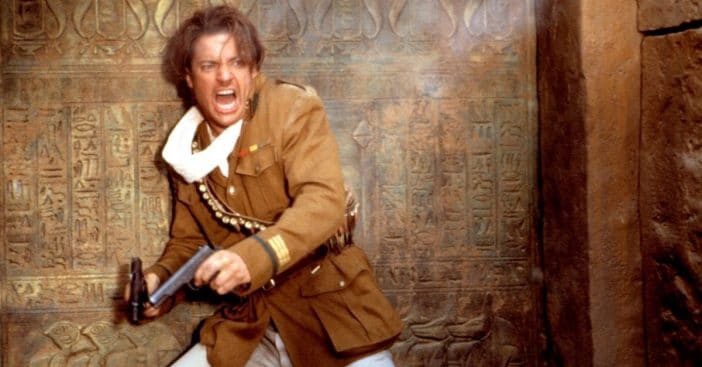 Released in 1999, The Mummy had all the trappings of a classic: action, romance, suspense, humor, and a talented cast who brought the campy film to a whole other level. Some of the effects were done digitally, but the actors had plenty of practical stunts. In fact, this is exactly how its star Brendan Fraser found himself choking and passing out.

The Mummy sees Fraser as the dashing, swashbuckling adventurer Rick O’Connell who leads a team to the perilous City of the Dead, where they are confronted by the cursed mummy of Imhotep. Seems everyone ended up on the wrong side of the river. But before even arriving there, they face plenty of other dangers as well.

There’s only so much a stuntman can do

Unless a stuntman is twins with the actor they’re representing, they can’t provide an exact copy of that actor’s appearance. So, an actor has to step in, to an extent, for closeup shots. Such was the case for a scene in The Mummy when Brendan Fraser could sit back for part of one dangerous stunt, but not all.

The scene in question has O’Connell hung while in prison. A crowd watches and cheers as the planks fall away from his feet, but the plummet does not break his neck, buying Evelyn Carnahan time to bid for his life. A stuntman performed the most dangerous part of the scene while wearing a harness, when O’Connell actually “fell,” using a wide shot. But they needed closeup shots as well, and to maintain the immersion, Fraser was asked to put himself in that position.

“There was a hangman’s gallows, and there was a hemp rope tied into a noose that was placed around my neck,” Fraser outlined. “The first take, I’m doing my best choking acting. Steve says, ‘Can we got for another one and take up the tension on the rope?’ I said, ‘All right, one more take.’ Because a noose around your neck’s going to choke you in the arteries, no matter what.”

That’s when things took a scary turn. Fraser went on, “So, the stuntman took up the tension on the rope, and I went up on the balls of my feet, then I guess he took the tension up again, and I’m not a ballerina, I can’t stand on my tip-toes. I remember seeing the camera start to pan around, and then it was like a black iris at the end of a silent film. It was like turning down the volume switch on your home stereo, like the Death Star powering down. I regained consciousness and one of the EMTs was saying my name.”

Ultimately, incidents like on The Mummy and other films contributed to Fraser stepping out of the action-packed limelight to focus on his physical and mental health. How scary must that have been?