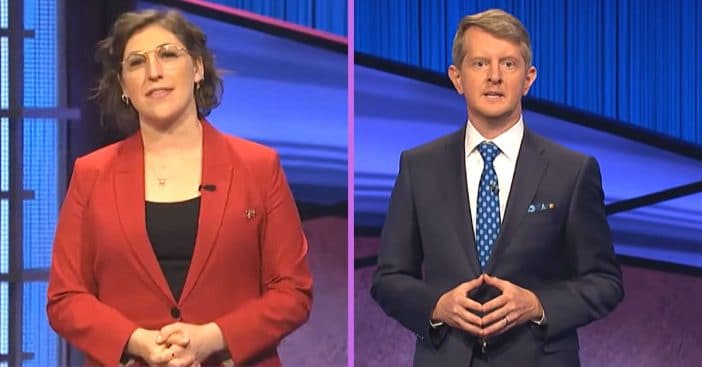 Pursuing a profession in the public spotlight comes with fame. Fame comes with a big, open door to criticism. It’s become easier than ever to share feedback either with fellow fans or with someone directly involved in a project, and people have been very vocal about Mayim Bialik and Ken Jennings since they took up hosting Jeopardy!

Bialik, in her podcast Bialik Breakdown, revealed some of the comments that have been leveled her way. She spoke with actor Justin Long, who appeared opposite Bruce Willis in 2007’s Live Free or Die Hard, sharing that she’s received criticism against her appearance, and many different comparisons to Jennings. Learn some of what she’s been told here.

Mayim Bialik is aware she’s being compared to Ken Jennings, not always favorably

Bialik and Long got right into it for the episode, which went live on June 7. There was some discussion of excitement to be chatting together, especially as a fan of Jeopardy! Then, the question was raised if Bialik has heard comments like, “We prefer you to Ken.” To this, Bialik confirmed, “Sometimes. Sometimes I get ‘we don’t prefer you to Ken.'” The two likened this hosting position and profession to politics, one of the few lines of work where they say people will tell a person “exactly” how they feel.

Jeopardy! producers have had a lot of fan feedback to read through about who might be the new permanent host, dating back to the death of Alex Trebek and the cycle of guest hosts the show introduced in the months that followed. Some were excited for personalities like LeVar Burton to take the reins, while others wished producers had invited people Trebek had personally mentioned as promising candidates. As for Bialik, she has her share of fans from both Jeopardy! and The Big Bang Theory, as well as critics, with plenty of comparisons to Ken Jennings thrown in.

Bialik has heard comments about her appearance

Jeopardy! viewers will recognize Bialik for her wavy hair, glasses, and cozy but formal attire. She leans into this wardrobe and proudly calls herself “both a geek and a nerd.” A geek for her fondness of sci-fi programs and Dungeons and Dragons. A nerd for reading academic papers for fun.

On the topic of appearance and open opinions, Bialik added, “[Fans will tell you] exactly how they feel. Like, ‘I saw you in a magazine. I was very confused. You looked pretty.’ I get that a lot.” Long proposed the opposite scenario too, adding, “Oh, jeez. This sounds like I’m bragging but,” before Bialik finished, “You’re better looking in person?”