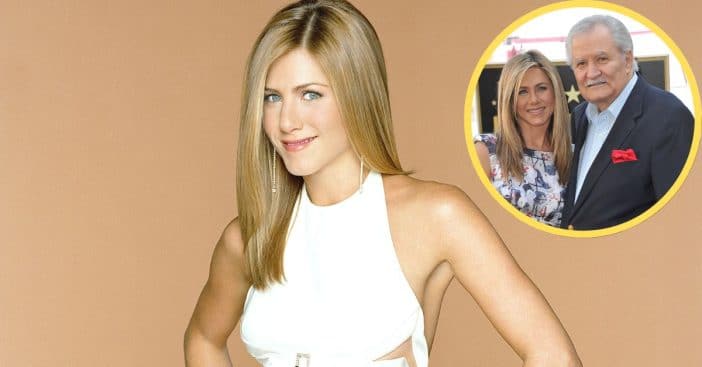 In addition to building a strong acting career of her own, Jennifer Aniston also comes from a strong family of performers. Her parents are fellow actors John Aniston and Nancy Dow. During the Daytime Emmy Awards on Friday, Aniston, 53, took time to celebrate her father and present him with an award acknowledging his accomplishments.

The Friends star’s own filmography spans over 30 years and multiple mediums, from film to TV, working in several genres for each. For her own work, she has received a Primetime Emmy, Golden Globe, and more. Fittingly, she was the one presenting her father, 88, with a lifetime achievement for his own contributions. No small part of that includes a memorable presence in the soap opera Days of Our Lives.

Jennifer Aniston presents her father with a lifetime achievement award

The only thing better than winning the #DaytimeEmmys Lifetime Achievement Award is having it presented to you by your daughter, Jennifer Aniston.❤️

The Pasadena Civic Auditorium hosted the 49th annual Daytime Emmy Awards. Most of the event was live, but Aniston put together a pre-recorded segment featured during the event. In it, she gave a speech celebrating her father’s work. “It’s an opportunity to not only pay tribute to a true icon in the daytime television world,” she said, “but it’s also a chance to recognize the lifelong achievement of a great and well-respected actor who also happens to be my dad.”

RELATED: Jennifer Aniston Shares What She Learned From Her Divorce From Brad Pitt

She continued, “John Aniston has been working in television consistently for over half a century.” Indeed, his career began in ’62 and he has not formally retired since. Though John is perhaps best known as Victor Kiriakis, as Aniston pointed out he has been in “nearly every soap opera imaginable,” adding, “You name it, I’m sure he’s been on it.”

The full scope of John Aniston’s life could be a feature-length program by itself, from his time in the U.S. Navy as an intelligence officer stationed in Panama, to his humble acting start as a character simply listed as Officer #1 in 87th Precinct. Since then, he added over two dozen episodes of Inhumanoids, several episodes of West Wing and Star Trek: Voyager, and many other shows and TV films to his resume. “But since 1985, his TV home has been with the cast and crew of the long-running soap opera Days of Our Lives, where he has given masterful performances as the dangerously handsome, perpetually suave businessman Victor Kiriakis,” Aniston noted of her father in her speech.

That’s a role he’s had for 3782 episodes. “For over 30 years, his dedication to that show has gained him respect and admiration of his fellow actors, deep friendships, and thrilled millions of fans around the world,” Aniston added. “His career is literally the definition of lifetime achievement.” As for her own experience delivering such a dedication speech, Aniston called it a “truly special” moment.