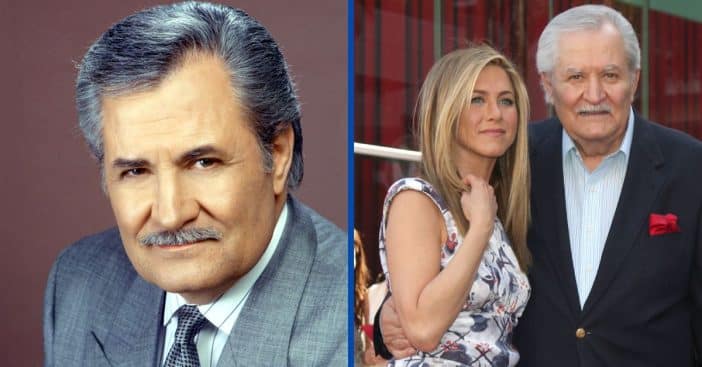 On Friday, November 11, John Aniston died. He was 89 years old when he passed. News of his death was confirmed by his daughter and fellow actor Jennifer Aniston with a tribute post shared on Monday. His career spans six decades but John most recently boasted a prominent role in the soap opera Days of Our Lives.

Just this year, John was awarded a Daytime Emmy Lifetime Achievement Award. Back in 2017, he was nominated for a Daytime Emmy Award for Outstanding Supporting Actor in a Drama Series thanks to his ongoing role of Victor Kiriakis, which he originated back in ’85.

This Monday, Jennifer took to Instagram to share a series of photos, all featuring her father John Aniston. It is also a timeline of them together as father and daughter, which her post also highlights. “Sweet papa…⁣ John Anthony Aniston,” Jennifer captioned the post. “You were one of the most beautiful humans I ever knew. I am so grateful that you went soaring into the heavens in peace – and without pain. And on 11/11 no less! You always had perfect timing. That number will forever hold an even greater meaning for me now I’ll love you till the end of time.”

Our hearts are broken over the loss of our beloved family member John Aniston. We love you John. Your legend will live on.
#DaysOfOurLives #Days @peacock pic.twitter.com/IWPArGRKQH

Once news broke of his passing, the official Twitter page of Days of Our Lives also shared a tribute post, along with a highlight reel celebrating his time in the show, which spans from 1985 to 2022. “Our hearts are broken over the loss of our beloved family member John Aniston,” the caption reads. “We love you John. Your legend will live on.”

The legendary work of a veteran actor

John Aniston was born as Yannis Anastassakis, a native of Crete, Greece, on July 24, 1933. His career is a prime example of never being able to anticipate what the future holds, as his first gig in 1962’s 87th Precinct saw him cast as Officer #1, a far cry from where he’d end up. His prominence gradually rose, eventually leading him to the role of Victor. But his peers remember him as more than just a colleague. Series co-creator Ken Corday calls him a “beloved and legendary cast member and dear friend.”

Jennifer has yet to confirm any specific cause of death but Corday calls it a comfort to know John “is at rest and no longer in pain.” John leaves behind daughter Jennifer and son Alex Aniston. Jennifer’s mother, who was John’s first wife who he divorced in 1980, died in 2016. In ’84, John married Sherry Rooney and the two were together ever since.

The world is truly mourning one of the greats. Rest in peace, John Aniston.