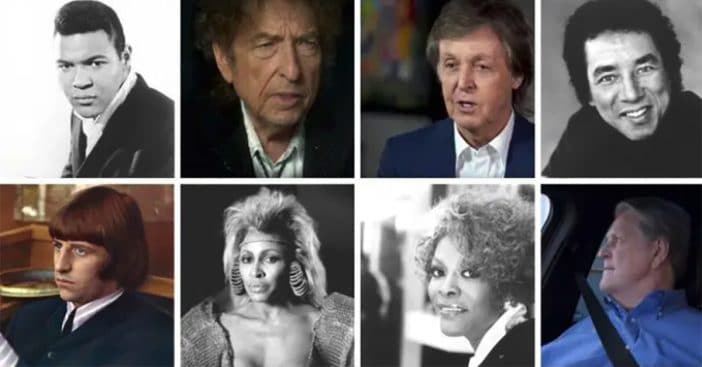 Some Rock and Roll music icons from way back have had successful career runs and are still rockin’ and rollin’ into their 80s. Some legends who would have been 80 have passed away, like guitar lord Jimi Hendrix and vocalist Janis Joplin, who died in 1970; and Mama Cass, who died in 1974 —but their legends remain.

Let us look at eight legends of Rock and Roll and Pop who recently turned 80 and are still very much on the pop culture scene, making an impact as only they how they know to.

Checker was born on October 3, 1941, and has made a mark in American pop culture with his dance party jam “The Twist,” which topped the charts in 1960 and made a comeback again in 1962. The original, “The Twist,” and its follow-up, “Let’s Twist Again,” remains one of the greatest hits in pop-music history and was once named the biggest chart hit of all time by Billboard. Checker hasn’t stopped performing, as you can find him touring the nation in his tricked-out bus called The Checkerlicious Express.

RELATED: 7 Award-Winning Musicians Who Surprisingly Aren’t In The Rock & Roll Hall Of Fame

The 81-year-old’s career skyrocketed after his 1963 hit album The Freewheelin’ Bob Dylan and subsequent singles like “Blowin’ in the Wind” and “The Times They Are a-Changin’.” Following three decades of touring, Dylan took an extended break from the road, but has returned. The current tour is “Rough and Rowdy Ways,” which will last until 2024 according to his website.

The Bob Dylan museum, established to celebrate the legendary Nobel prize winner, recently opened in Tulsa. His works are taught by  Kevin Barents, a College of Arts & Sciences Writing Program senior lecturer, and Jeremy Yudkin, a College of Fine Arts professor of music, musicology, and ethnomusicology in “Bob Dylan: Music and Words.”

McCartney recently finished his “American Got Back” tour at MetLife Stadium in East Rutherford, New Jersey, entertaining a present crowd of over 60,000 people. The fans at the stadium celebrated him with a “Happy Birthday” song two days before he closed out the tour.

During his tour, he paid tribute to his late Beatles bandmates, John Lennon and George Harrison. The legend also announced the release of a box set of his solo albums, covering his works from his career after The Beatles from the 1970s until today.

The 82-year-old is still on the road, performing across the US and Canada. Robinson, a songwriter, and executive at Motown Records, is an inductee of the Rock and Roll Hall of Fame. Smokey’s smooth sounds still make us dance, even after seven decades of performing with The Miracles.

The singer-songwriter actually battled COVID-19 in 2021, spending considerable time in the hospital. “I was in the hospital for 11 days before Christmas, and it wiped me out. It was touch and go,” he told the Union-Tribune. “Everything means more to me now,” he commented.

Ringo and His All Starr Band recently announced their revised North America tour, with 12 show dates needing to be moved because of COVID-19-related issues. According to the band’s website, the tour is set to kick off in September at Tanglewood in Massachusetts, then close out in Mexico City in October. The All Starr band includes American singer-songwriter Edgar Winter and Australian hitmaker Colin Hay of Men at Work fame.

Although now retired — according to her —Tina Turner, the dancing diva, was celebrated on Broadway with Tina: The Tina Turner Musical, which is expected to end in August. The three-time Grammy Award winner, who sang the smash hit “What’s Love Got to Do With It,” is still a presence in the Rock and Roll culture. After learning that Miles Davis recorded an instrumental of the song, music fans lit up excitedly. The song won her Grammys for Song of the Year and Record of the Year in 1984.

One of the most successful singers of all time, Dionne Warwick had 56 songs on the Billboard charts consistently from 1962 to 1998, including all-time classics like 1967’s “I Say A Little Prayer” and Grammy-winning “That’s What Friends Are For,”  which she recorded with Elton John, Gladys Knight and Stevie Wonder in 1985.

The 82-year-old star is currently performing in the United Kingdom on her, “She’s Back: One Last Time” tour.

Brian Wilson recently turned 80, but still has the energy in him, and is still getting around, ’round, ’round. He toured America with ’70s hitmakers Chicago, making a birthday stop in Kansas. His bright, happy music, blended with sweet surf sounds in delightful harmony, was a top one in the glory days of musical South California.

“To me, you’re the only real pop genius in the world,  and I love you very much,” Elton John told Brian.

RELATED: Dionne Warwick Says She’s Doing Exactly What She Wants to Do in Life

Click for next Article
Previous article: Kraft Macaroni & Cheese Is Ditching Its Famous Name And Box
Next Post: ‘Top Gun: Maverick’ Has Made Over $900 Million