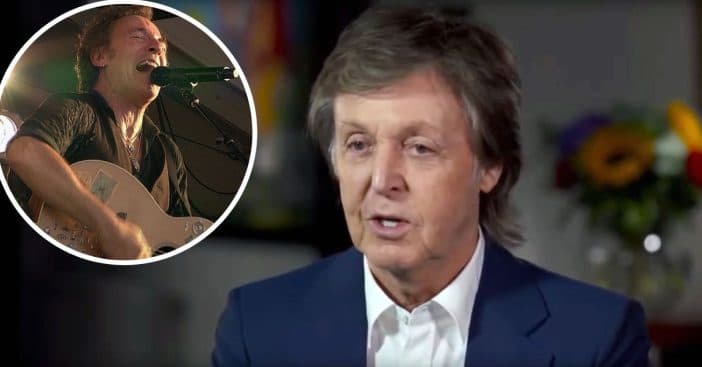 Bruce Springsteen recently crashed Paul McCartney‘s concert in New Jersey. Paul is currently on tour and played at the MetLife Stadium on Thursday. Paul called Bruce’s appearance at the show a “birthday present to myself” as the former Beatle turns 80 this weekend.

Bruce and Paul jammed together and performed The Beatles hit “I Wanna Be Your Man.” Bruce also played his hit song “Born in the U.S.A.” Towards the end of the show, Jon Bon Jovi also came on stage and they all performed “The End.”

It sounds like a truly iconic performance and experience for fans. This isn’t the first time that Bruce has appeared at another artist’s concert at MetLife Stadium. The New Jersey native came onstage at Coldplay’s concert a few weeks ago and performed “Working on a Dream” and “Dancing in the Dark.”

RELATED: Paul McCartney ‘Gets Back’ To Beatles & Wings Roots In Recent String Of Concerts

Perhaps he is just warming up for his own tour! Next year, Bruce and his E Street Band are going on tour in Europe and are expected to tour North America as well. As for Paul, he is finishing up his U.S. tour and will be heading to the UK very soon.

Watch one of the amazing performances by Bruce and Paul at the concert below. If you had to pick, which of these amazing performers would you like to see live? Or, did you see this show in person? If so, comment and share your experience!

Click for next Article
Previous article: Get A Sneak Peek Of Ana De Armas As Marilyn Monroe In New Film
Next Post: Co-Stars Made Filming ‘The Wizard Of Oz’ Nightmare For Judy Garland