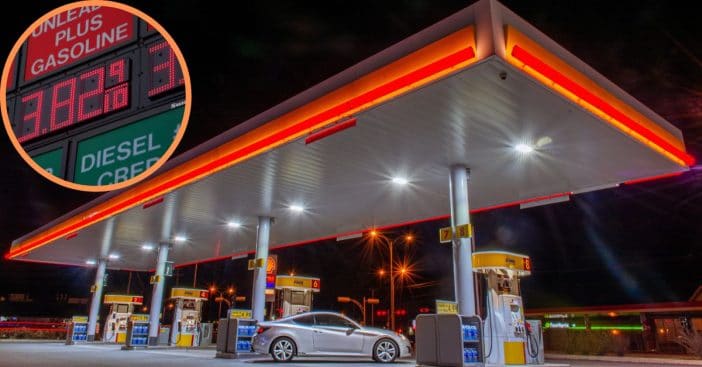 Gas prices continue to reach new thresholds just in time for summer travel. As many as 73% of Americans have travel plans this summer, but anyone who has to fill up their car has seen the numbers go up – and they are probably wondering amidst all these changing numbers why the one consistency is how prices are advertised ending with 9/10 of a cent.

CNN Business reports that the national average was just shy of $5.02 a gallon on Tuesday, with California representing the upper limit of an average price of $6.44 a gallon. Even in those cases, signs would end the advertisement with 9/10 of a cent. Why? It comes down, in part, to image during the Great Depression.

Today, the dollar is our primary currency. But decades ago, the dime and even penny represented a lot more money even alone. In fact, pennies were the unit of measurement for buying gas in the early 20th century. During the Great Depression, the price was around 10 cents a gallon. Businesses still wanted consumer activity, though. But there were other big events going on that needed addressing.

RELATED: Gas Prices Are Going Up In Various Parts Of The US At Nearly $10 A Gallon

During the advent of using cars for big travel plans, roads, specifically highways, became more important than ever. To build up highways, states introduced a sales tax on gas, which introduced the need for fractional price increases. Gas stations put this sales tax right in with the price for gas drivers would pay. But since this was the Great Depression, it was important to not repel consumers with prices no one could manage in such trying times. Adding even one cent to the cost meant a 10% increase in the price, because gas cost 10 cents already.

This practice exists in a different format everywhere else

Gas stations may be the most famous for advertising 9/10 of a cent, but other retailers put the psychology behind this into practice in different ways. Rutgers marketing professor Robert Schindler explains, “To consumers, a price such as 19.9 cents feels substantially lower than the price of 20 cents.” This desire is so strong, that the most common price listing for gas now is $4.999.

In 1985, Iowa briefly tried banning this type of listing, with one state senator reportedly objecting, “We don’t have a one-tenth of a coin.” But it returned before the decade was done. This time, instead of removing, drivers are thinking about adding something to combat these prices: electric cars.

RELATED: Many Consumers Ask For Gas Taxes To Be Suspended During Record-High Gas Prices