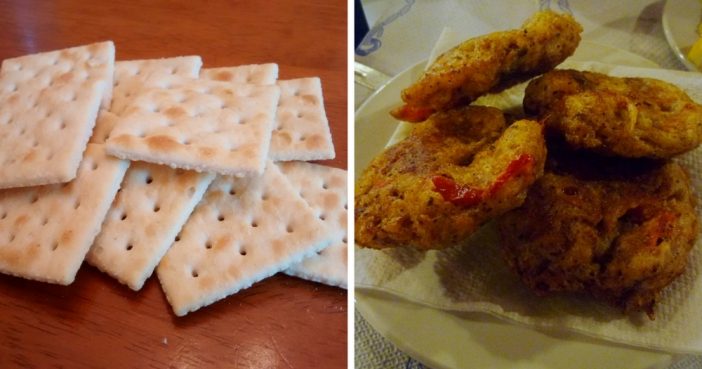 From the stories we heard growing up to the recipes that we are still using today, the Great Depression has left its mark on the generations that followed. Just from the recipes alone, we begin to understand just how much they scrimped and saved wherever they could. And it wasn’t just shortcuts in existing recipes, either. The need for filling meals and snacks led to the invention of many a new recipe.

While some of them we still make to this day (wacky cake anyone?) some of these ingenious formulations seemed to have been lost to time. So, we thought it would be fun to take a look at the creative ways they used the humble saltine back in the 1930s to round out meals or even to create new ones!

There are a few incarnations of this treat we’ve seen, such as grape icebox cake, cappuccino icebox cake, and this modern caramel icebox recipe.

The basis of this cold treat is cream and saltines, with more ingredients added as you have them, though many of us know this treat as a way to use vanilla wafers or graham crackers.

The saltiness in this recipe stands in for the apples.

The softened texture doesn’t completely give way, giving them a mushy consistency like stewed apple slices might have. What an ingenious way to use crackers!

Also called crackerflitters, this dish is really what it sounds like. Saltine crackers are soaked in water, then fried in oil, and finally covered in maple syrup or sprinkled with sugar.

We’ve also heard of modern spicy versions as well! In the video below, cook Libbie Summers contradicts her father’s advice to only use “real” saltines (from the grocery store) by making her own crackers from scratch and then frying them up while she talks with him about this “delicacy” from his childhood.

Most of us have heard stories about saltines during the Depression. We’ve heard of folks who would order a cup of hot water at a diner then mix in ketchup and saltines to make something like tomato soup. We’ve also read stories of how saltines were often set on the counter in restaurants, like bowls of nuts in a bar and folks would order one cheap thing and then fill up on crackers. But, these recipes take it a step further by trying to feed a whole family. And the ways in which they used scant ingredients were truly amazing.

Page Page 1 of 3
Previous article: Who is She?
Next Post: 15 Famous Couples Who Actually Stayed Together Proving Love Can Last Forever