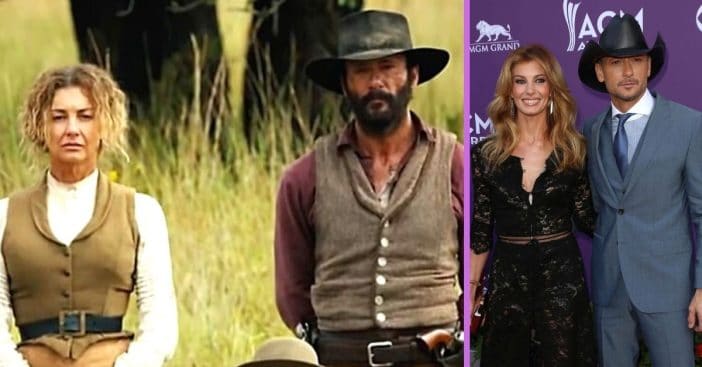 Traces of method acting can probably be unearthed from centuries ago, but as a theory, it’s relatively recent. It’s also relatively popular in its many iterations, from Viggo Mortensen performing through a foot injury to Jamie Foxx keeping his eyes shut to experience Ray Charles’ blindness. Recently, Tim McGraw delved into some odorous method acting for 1883 – that is, until wife Faith Hill told him he needed to keep taking showers again.

Both McGraw and Hill were filming 1883 together; the Paramount+ drama acts as a prequel to Yellowstone starring Kevin Costner. The two were already method acting as they played a married couple in the series but McGraw took it a step further, staying in character by mimicking a lack of hygiene for the time.

Tim McGraw got immersed in the feel and smell of 1883

As James Dutton, McGraw plays a former prisoner-of-war who moves with his family to seek a better life after the Civil War, while Hill plays his wife Margaret Dutton and the matriarchal rock of the family. As the name suggests, 1883 centers around the years following the Civil War and the generation that must plant their roots after the dust of war settled.

Not only does constant travel limit when Dutton could take a proper bath, but the era also influenced how people cleaned themselves; well-off homes had baths, but besides that, people just prioritized cleaning a few important and odor-prone parts of their body before going about their day. McGraw decided to emulate how this would feel by not taking showers while filming the series. In addition to taking away, he also added to his routine to better method act. He continually dyes his – real – beard as it grows in white to better suit the show and he put on 10 pounds “just to look more like the part.” The lack of showers is what really got to Hill, though.

“There were a few times that my wife forced me to take a shower while we were shooting, because I wanted to stay in character as best I could,” McGraw shared, before adding, “She’s like, ‘I don’t care about Method [acting]. You stink!'” Ultimately, the smell was the real deal-breaker for Hill, but for McGraw, everything else he did to get into character took more getting used to.

“To show up and put on these tight jeans and have this big dark, dyed beard, and have the script in my head and trying to remember words, I just didn’t feel comfortable at all,” he admitted. “It was tough to do.” The slap was also another surprise blow – literally. In one scene, Hill’s character strikes Dutton and the impact was very real and even harder than what McGraw expects, of which McGraw says, “There was 25 years of pent-up aggression going on! When you see it on screen, you realize it was a genuine hit.”

RELATED: How Tim McGraw And Faith Hill Keep Their Love And Marriage Strong After 21 Years