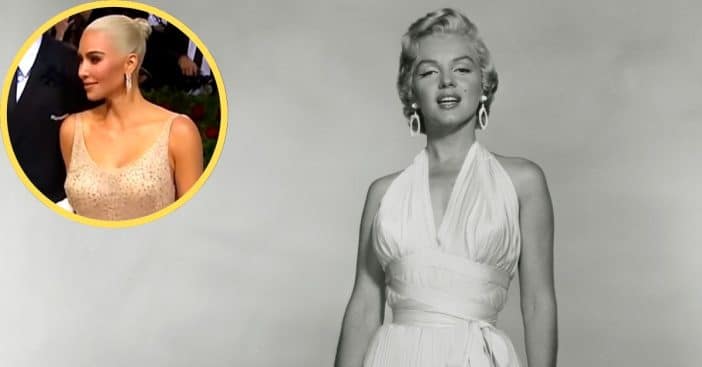 Some high-profile figures elevate their outfits to equal levels of fame as themselves. Take Princess Diana’s blue gown from her dance with John Travolta, or Jayne Mansfield and the color pink. In 1962, Marilyn Monroe famously donned a sheer, off-white dress that has returned to the spotlight – this time worn by Kim Kardashian.

While Monroe wore it to perform for John F. Kennedy, in celebration of his birthday, Kardashian, 41, wore it to the Met Gala on the famous first Monday of May. The original outfit saw the spotlight again – but how would Monroe have felt seeing her very own original dress used again like this?

Monroe wore the shimmering white number, nicknamed the “Happy Birthday, Mr. President” dress, to sing for JFK on his 45th birthday. That was on May 19, 1962; by August 4 of that same year, Monroe died under circumstances still debated to this day. As for the dress, it has been on display at Ripley’s Believe It or Not! Florida location.

It’s this original dress, not a recreation or look-alike, that Kardashian wore to the Met Gala. The move has sparked criticism from fashion history professor Dr. Justine De Young, based out of the Fashion Institute of Technology. “She can –– and did –– commission a replica which would be indistinguishable from the original,” Dr. Young objected. “Such an iconic piece of American history should not be put at risk of damage just for an ego-boost and photo-op.” The professor also disapproved of Kardashian revealing she cut out carbs and sugar to lose 16 pounds in three weeks, all to fit into the dress, calling it “an unfortunate message to be sending.”

Met Gala — In America: An Anthology of Fashion

I am so honored to be wearing the iconic dress that Marilyn Monroe wore in 1962 to sing “Happy Birthday” to President John F. Kennedy. It is a stunning skintight gown adorned with more than 6,000 hand-sewn crystals by Jean Louis. pic.twitter.com/o9auAd2tF8

On the other hand, Monroe’s estate has reportedly voiced approval of Kardashian’s fashion choice and believes Monroe herself would agree. Authentic Brands Group is responsible for running Monroe’s estate. TMZ claims President Nick Woodhouse says Monroe would have been excited to know Kardashian was wearing her dress to the Met Gala and would draw comparisons between the two pop culture icons.

Specifically, Woodhouse felt both women are known to be photogenic, independent, influential, and entrepreneurial. Reportedly, Kardashian did not approach the estate for its blessing but did go through the proper channels with Ripley’s; the move has garnered Monroe’s estate numerous mentions since the Met Gala and kept Monroe relevant six decades since her untimely passing.

What do you think about Kardashian wearing this famous Monroe dress?

Click for next Article
Previous article: Kelly Ripa Shares Rare, Adorable Photos Of Her Dad
Next Post: Kris Jenner Was Inspired By Jackie Kennedy For The Met Gala