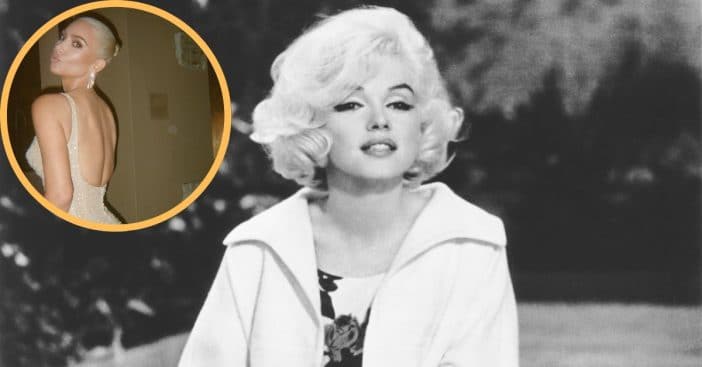 The dress worn by Marilyn Monroe to sing “Happy Birthday” to President John F. Kennedy saw the spotlight again when Kim Kardashian wore the dazzling number to the Met Gala in May. However, newly-surfaced images indicate that the dress has been changed and may have suffered damage from the move.

The dress was rented out to Kardashian by Ripley’s Believe It or Not, which claims no alterations were made to the dress and that Kardashian changed into a replica after the initial red carpet event. The dress turns 60 this year and was designed to be so form-fitting, Monroe herself had trouble putting it on and wore nothing underneath to accommodate the restriction. It was also her last major public event before her death.

A post shared by The Marilyn Monroe Collection (@marilynmonroecollection)

Kardashian’s initial move to wear the exact “Happy Birthday” dress to the Met Gala inspired a variety of contrasting reactions. Fashion history professor Dr. Justine De Young slammed the move, saying, “Such an iconic piece of American history should not be put at risk of damage just for an ego-boost and photo-op.” Marilyn Monroe historian Scott Fortner feels the same now that the deed has been done. Fortner shared pictures to Instagram showcasing what the dress looked like after Kardashian wore it.

RELATED: Don Murray Talks About What It Was Really Like To Work With Marilyn Monroe

“I think my initial reaction was just shock,” said Fortner. “You know, this is not just a dress. This is an iconic costume, it’s an iconic gown. Not only is it the most expensive gown that’s ever sold at auction, it’s really kind of a representation of a period in time. I mean, it’s a fashion icon. It’s a celebrity icon. It’s a political icon. It’s cross cultural, you know, it’s part of American history. So it was really shocking to see that Ripley’s would allow anyone to wear the dress.”

What does this mean in the bigger picture?

Fortner’s post does note that Ripley’s did have numerous safeguards to maintain the dress’s safety as best as possible. Amanda Joiner, vice president of licensing and publishing with Ripley’s, explained that there was always a representative nearby ready to pause everything if the dress seemed at risk. Kardashian claims she felt fully aware of the dress’s importance, saying, “I’m extremely respectful to the dress and what it means to American history. I would never want to sit in it or eat in it or have any risk of any damage to it and I won’t be wearing the kind of body makeup I usually do. Everything had to be specifically timed and I had to practice walking up the stairs.” Reportedly, she wore the dress for a total of five minutes. After photos of the aftermath started circulating, her actions have become an online joke, with Twitter users sharing photos of outfits they like or dislike and bidding Kardashian to stay away or impact a different gown.

i shot @KimKardashian with my disposable camera at the Met Gala. 🫶🏼 pic.twitter.com/gdfI5cBu2g

Conservation of textiles is a whole complicated field on its own that has to factor the materials of the fabric itself, the weight of any additions like beads, dyes coloring the fabric that might fade, and even the acidity present on paper tags. The famous “Happy Birthday” dress worn by Monroe was made primarily of marquisette fabric with the weight of 2,500 rhinestones tugging down on it. Essentially, anytime any element could act on the dress, it was at risk of being changed. Fashion designer Bob Mackie drew the original sketch of what became the shimmering Jean Louis gown. “I thought it was a big mistake,” Mackie said of Kardashian wearing the “Happy Birthday” dress. “[Marilyn] was a goddess. A crazy goddess, but a goddess. She was just fabulous. Nobody photographs like that. And it was done for her. It was designed for her. Nobody else should be seen in that dress.” Reportedly, when requesting the dress herself, Monroe instructed Louis, “I want you to design a truly historical dress, a dazzling dress that’s one-of-a-kind, a dress that only Marilyn Monroe could wear.”

RELATED: Elvis Presley And Marilyn Monroe May Have Spent Romantic Evening Together

Click for next Article
Previous article: Internet Explorer Is Officially Shutting Down After 27 Years
Next Post: Details Of Ozzy Osbourne’s Major Surgery Are Being Shared With Fans