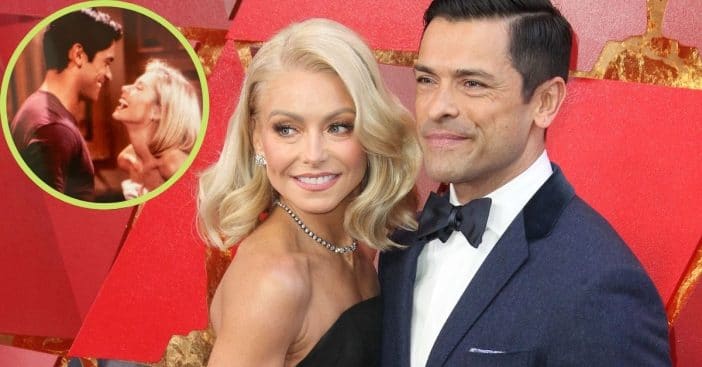 Kelly Ripa shared a photo of where it all began. All My Children gave soap opera fans thousands of episodes packed with drama, romance, and chemistry, and it also introduced Ripa and Consuelos to one another. That resulted in a marriage that’s going strong to this day and Ripa recently shared a throwback photo to the days of when she and Consuelos worked together on the show.

The two first met in the mid-’90s when Consuelos was recruited to play the love interest of Ripa’s character. The two dated soon after and married in 1996. Today they are now the proud parents of Michael, Lola, and Joaquin. But Ripa’s photo takes her fans on a very nostalgic and romantic trip down memory lane.

In a post announcing that Haley, her AMC character, loves Mateo, Ripa shared a throwback photo of herself and Consuelos smiling at one another. The image is slightly blurry and has a golden hue to it, adding to the tender emotions of the shot.

The caption dates it at 1998, so the two would have been married by then. Ripa began on All My Children in 1990 and stayed to 2002, then again in 2010, always as Hayley Vaughan. Consuelos actually arrived a whole five years later, though his salary reportedly eclipsed Ripa’s, a point of contention she would be vocal about. He played Mateo Santos from ’95 to 2010.

Romance can surprise anyone

When Consuelos entered her life, Ripa admits she had not been envisioning married life for herself at that point. “I was not a hopeless romantic,” she admitted. “I never thought about getting married, it never occurred to me that I would grow old with someone.” Then came Consuelos, and “I saw my entire future with him flash before—like I saw it. And I [didn’t] believe in any of that and now I do because of that moment.”

But don’t think all romances follow one designated trajectory. “We broke up and we got back together the day before we went off and eloped,” Ripa revealed. “Yeah, we eloped. We went to Vegas and got married. He popped the question the day before we got married, but that day, that very day that we got back together, we were at a taping of Regis and Kathie Lee. It was their Mother’s Day special. They were pre-taping it, and one of the dreams of one of the mothers was to meet Mark and me. We were her favorite characters on All My Children. She wanted to meet us, and I think we drove out a new car or pushed out a new pool table or something. She got a present from her kids and we brought it out to her. It all is so connected.” Consuelos confirmed much of these details and added that the time when Ripa wouldn’t talk to him “made me go crazy.”

RELATED: Kelly Ripa And Mark Consuelos Can Only Hold Hands A Certain Way — Why And How?

Click for next Article
Previous article: Barbara Bush Considered Having A Baby Before She Met Her Husband
Next Post: Oldest Active Ranger, Betty Reid Soskin, Retires At 100 Years Old