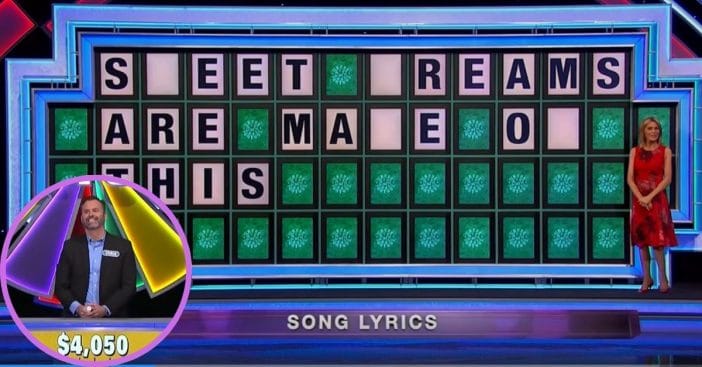 Buying the CD version of an artist’s new album means getting more than a bundle of songs; it usually also means obtaining the most important resource out there for fans: a booklet of song lyrics. Whether it’s an ’80s classic like “We Built This City” or Taylor Swift’s misheard tribute to “lonely Starbucks lovers,” some lines are just difficult to hear correctly. This problem was brought into the spotlight on a recent Wheel of Fortune game thanks to “Sweet Dreams,” sung by Annie Lennox.

The problem arose with the clue “song lyrics.” When it came time for competitor Chris Bryant to guess the answer, most of the letters were on the board, spelling out “S-EET -REAMS ARE MA-E O- THIS.” When it came time to guess, however, he was not marked as correct. Why?

Sweet dreams were not made of these

Bryant submitted “Sweet dreams are made of these” as his answer, which was buzzed as incorrect. “Oh yeah,” Sajak said consolingly. “And you knew it, as soon as it came out of your mouth.” That left the floor open for other contestants to guess, and the next response was the correct, “Sweet dreams are made of this,” the last word of which was fully spelled out on the game board. So, why the confusion?

Bryant’s mixup is one a lot of people would have made, based on social media posts responding to the incident. The song’s full official title by Eurythmics is “Sweet Dreams (Are Made of This)” and the lyrics read “Sweet dreams are made of this / Who am I to disagree / I’ve traveled the world and the seven seas.” But not only would Bryant’s rendition have rhymed as expected, it’s what most people sing and hear anyway.

Most people hear “Sweet Dreams” as the contestant did

Until I hear Annie Lennox confirm herself that the lyrics are “Sweet dreams are made of THIS”, I will not believe it. Wheel of Fortune ain’t gonna make me think I’ve been hearing those lyrics wrong for almost 40 years. #sweetdreamsaremadeofTHESE pic.twitter.com/pGppkuABpx

It’s easy to make errors when put on the spot; who else forgot all facts about themselves when a class icebreaker said to share an interesting tidbit? Make the audience national TV-watchers, and the pressure increases exponentially. But this Wheel of Fortune mistake was one a lot of music fans would have apparently made as a gut reaction. Since the episode, social media has become flooded with people who heard the correct “Sweet Dreams” lyrics for the very first time this year.

Twitter user @ebonie1015 declared, “Until I hear Annie Lennox confirm herself that the lyrics are “Sweet dreams are made of THIS”, I will not believe it. Wheel of Fortune ain’t gonna make me think I’ve been hearing those lyrics wrong for almost 40 years.” When @GothicGamelabs learned the truth, they wrote, “Anyone else questioning everything they know?” And while audience members usually shout different answers while contestants battle for the right answer, these two demographics enjoyed a moment of solidarity when @5tayOffMyLawn5 admitted, “The guy on #WheelOfFortune just said ‘Sweet Dreams are made of these’ to solve the puzzle, and that’s exactly what I said too. I could have swore it was ‘these’!”

How do you usually sing this line of the song? Just what are dreams made of?