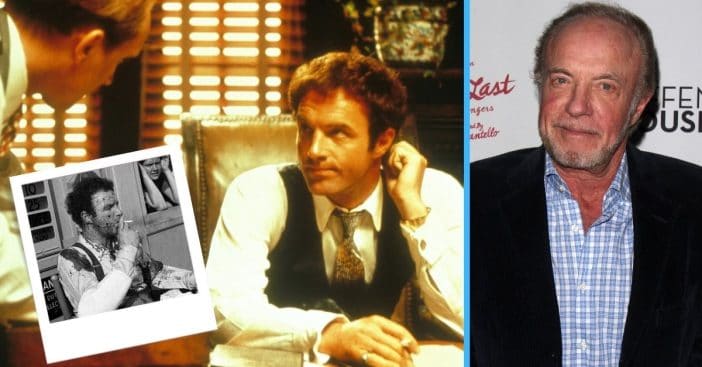 Sonny Corleone wants someone good, and that means very good, to share photos from The Godfather. Well, if you want something done right, best do it yourself. James Caan gave an iconic performance as the eldest Corleone brother in the 1972 crime film starring Al Pacino and Marlon Brando and he’s still able to ignite our nostalgia, most recently with a crisp behind-the-scenes photo.

Caan’s fiery performance in The Godfather won him an Academy Award and Golden Globe nomination for Best Supporting Actor — while Sonny himself famously lost his life in a toll booth “incident.” Fans got to see a different angle of the mobster looking worse for ware, though decidedly cool about the whole thing.

Caan’s over 100k Twitter followers were treated to a rare behind-the-scenes shot from The Godfather on Monday. The post, which has attracted thousands of likes, reads, “‘Jimmy, that’s a wrap!’ Yeah, yeah I know. End of tweet.”

Fun fact: I was showing Francis the shoes I bought at a local store in NYC because I felt "Sonny" would have a crisp pair of black & whites like these. End of tweet pic.twitter.com/sZJ12mwWb1

That cool, dismissive tone matches the very film noir photograph, a black and white shot of Caan in full Sonny Corleone costume and makeup — very bloody and battered makeup — seated in a chair and unconcernedly smoking a cigarette outside of a toll booth. Earlier, he had shared another black and white shot, explaining, “Fun fact: I was showing Francis the shoes I bought at a local store in NYC because I felt “Sonny” would have a crisp pair of black & whites like these. End of tweet.”

James Caan is keeping ‘The Godfather’ legacy alive and well

Sonny may have ended up in the body count of family rivalries turned deadly, but Caan’s performance and the impact of The Godfather on cinematic history is still felt to this day. It provided an invaluable springboard for several actors in their growing careers and netted several Academy Awards and Oscar nominations. It remains recognized as one of the most influential films not just for the mafia and gangster genre but the entire film industry, and by 1990 entered the U.S. National Film Registry of the Library of Congress.

Cementing this legacy was truly a team event on all levels, from the Mario Puzo novel it was adapted from, to the crew that set the atmosphere, and the cast that made individual choices for their characters. For instance, James Caan captured Sonny’s indomitable personality by improvising the scene where he throws the FBI photographer’s camera to the ground; the actor’s alarm is genuine. Throwing the money was his idea as well, the better to juxtapose the warped sense of honor these killers operated by. Some of the best scenes of any movie really are unscripted. He wasn’t afraid to throw that honor in the dumpster, literally, and improvised using the trash lid in his fight with his sister’s husband. There is no mistaking it: James Caan is Sonny Corleone.

RELATED: ‘The Godfather’ Director Francis Ford Coppola States He Is ‘Done’ With The Franchise

Click for next Article
Previous article: Wendy Williams Will Not Return To Her Talk Show For The Rest Of The Season
Next Post: Pat Sajak In Shock Over Historic ‘Wheel Of Fortune’ Wins