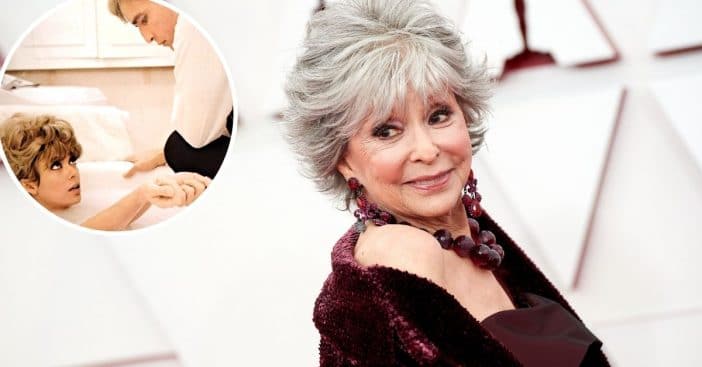 Rita Moreno opened up about the ups and downs during her eight-year relationship with fellow actor Marlon Brando. The two met on the set of the film Désirée in 1954 and fell in love. While she said that it was very exciting to be with him, it was also toxic because he could be a “bad guy.”

She shared on Jessica Chastain for Variety’s “Actors on Actors” virtual chat, “Ultimately, it was exciting to be with Marlon. Oh, my God, it was exciting. He was extraordinary in many, many ways, but he was a bad guy. He was a bad guy when it came to women. I was such a different person then. I had all the makings of a doormat.”

Rita added that she could tell when he was lying and he often mistreated her. His mistreatment led her to attempt suicide. She revealed, “I tried to end my life with pills in his house. That’s how I tried to do it. I didn’t understand that if I was going to kill this pathetic, sad, trod-upon Rita, the rest of Rita was also going to go with me. I really didn’t seem to understand that. But that’s what the attempt was. It was an attempt.”

Ultimately, they split up and Rita moved on and married Leonard Gordon in 1965 and they had one child together. Rita worked with Marlon in the 1969 film The Night of the Following Day. Rita had moved on but Marlon wanted her back when he saw her.

She added, “What’s interesting is that he wanted to renew. I was now married. I had a beautiful child, Fernanda. He was ready to have a go again. I didn’t want that. But he did. He lost a big part of himself, I think. The good part of him, the good Marlon that Rita loved. It was very complicated. Really, really complicated.” Rita stayed married to Gordon until his death in 2010. Marlon died in 2004.

Click for next Article
Previous article: ‘Barney Miller’ Cast Then And Now 2022
Next Post: ‘Hawaii Five-O’ Star James MacArthur Loved Hawaii In Real Life Before His Death At 72