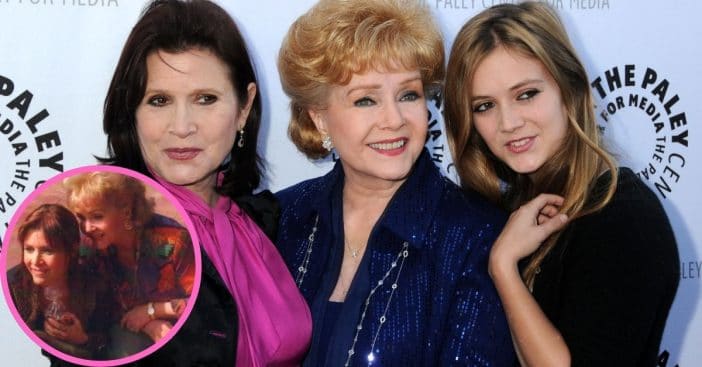 Five years ago, on December 28, Debbie Reynolds died at the age of 84. Her passing fell one day after the death of her daughter Carrie Fisher. Fellow actress and granddaughter to the Academy Award nominee Billie Lourd honored this somber occasion with a throwback photo of Reynolds and her famous family.

Lourd, 29, is known for the Fox series Scream Queens and American Horror Story, the latter of which she is still involved in. She is the only daughter to Carrie Fisher and is a niece to director and producer Todd Fisher. Throughout her acting career, she frequently pays homage to her mother, and her grandmother had been a frequent presence in her life before Reynolds’ death.

Billie Lourd shares a photo of her, Debbie Reynolds, and Carrie Fisher

Three generations of actors are presence in the throwback photo Lourd shared starring her mother and grandmother. It shows Fisher and Reynolds smiling at a small Lourd, who is facing away from the camera but is evidently years younger with a head of short blonde hair. Both Reynolds and Fisher are smiling at the toddler.

Lourd captioned the photo with emojis spelling out “Abadaba,” which is known to be Lourd’s nickname for her famous grandmother. The post went live to honor the passing of Reynolds, who would have been 89 this year. Lourd lost both women within a day of each other, and processing the loss still, Lourd says “My grief is a multi-course meal with many complicated ingredients.”

Lourd adds that explaining her grief is never straightforward and adds that she is “in a different stage of grief in each moment of every day.” She also asserts that there is no definitive “should” when it comes to grief, only that it is whatever each person makes of it, advice for anyone in a similar situation confronting loss, as she is also “Sending my love to anyone out there who needs it.”

The late Debbie Reynolds left a sweeping legacy before her death, having been nominated for a Golden Globe, Academy Award, Tony Award, an Emmy Award, and Daytime Emmy. In 2015 she at last received the Screen Actors Guild Life Achievement Award. Her final film appearance ended up being in the documentary about her life, Bright Lights: Starring Carrie Fisher and Debbie Reynolds. Reynolds ultimately passed away from a stroke but she and Fisher both maintain a strong presence in Lourd’s life.