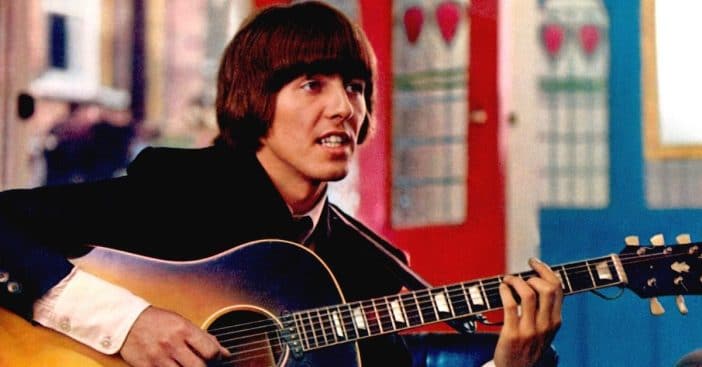 George Harrison was a pretty tough music critic. As one of The Beatles members, he was inspired by other artists but didn’t often love listening to any of the newer music that came out. He admitted that he loved old-school music and preferred to listen to music from the ’50s and ’60s. However, there was one newer band that his son, Dhani showed him that gave him a “buzz.”

George said back in 1992, “I can’t say I’ve really heard anything that gives me a buzz like some of that stuff we did in the Fifties and Sixties. The last band I really enjoyed was Dire Straits on the Brothers in Arms album. To me, that was good music played well, without any of the bulls***.”

He continued, “Now I’m starting to get influenced by my teenage son, who’s into everything and has the attitude. He loves some of the old stuff, like Hendrix, and he’s got a leather jacket with Cream’s Disraeli Gears album painted on the back. As for recent groups, he played me the Black Crowes, and they really sounded okay.”

Prior to that, George said that he mainly listened to Elton John, Bob Dylan, and Eric Clapton. He didn’t like punk rock and explained, “Well, musically the punks have been and gone, haven’t they, and it all seems to be very musical again. Elvis Costello is very good – very good melodies, good chord changes. I’m pleased about his success, but I never liked those monotone kinds of yelling records.”

It seems that George was very particular about what kind of music he liked but it is nice that he was able to bond with his son over a newer group. Sadly, he died in 2001, so we won’t know if he would have liked any modern bands or groups.