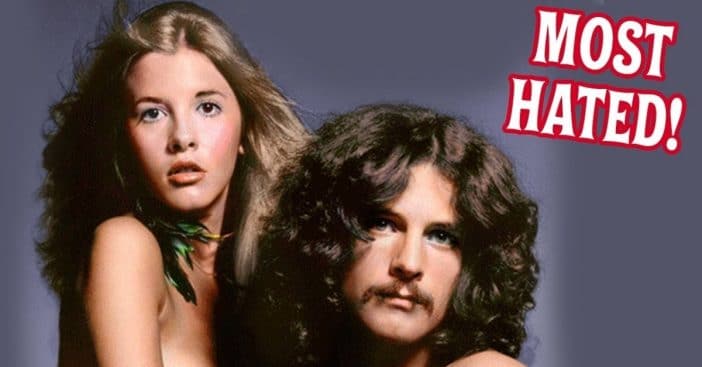 The ’70s was a great time to be alive with possibly and collectively the best music of any other decade ever. Even some bands we associate with the ’60s made their best music in the ’70s. Both laymen and critics alike still heap high praises on bands like Led Zeppelin, The Who, who else? The Doors, even the BeeGees. But what about those bands everybody loves to hate? Those bands may not really be so bad, but for whatever the reason… haters gonna hate.

Today we’re highlighting some of the worst bands of the 1970s. Now don’t go breaking my heart! Let’s take a “Walk on the Wild Side” to see who was the worst musical group of the ’70s.

***Warning: We’re all friends here and musical tastes of course vary. If you think we missed a real stinker from the ’70s, please add them in the comments. And, if you think we include someone who shouldn’t be on this list, give me the song that will change my mind! I’m always looking for new, old music. Now let’s dance.

The Buggles were a British New Wave duo who were certainly unique… Trevor Horn, the vocalist and bassist, said that their name was inspired by his oversized glasses, which made him look bug-eyed like a “buggle.” But it’s also been stated that they are the generic sort Costco brand of The Beatles. Either way, the name is pretty. You may remember them for one specific reason. Their song “Video Killed the Radio Star” was the first music video that aired on MTV on August 1, 1981! An appropriate song title because music videos soon took the world by storm. And maybe they really did kill the radio star.

But the song didn’t gain popularity quickly… They pitched it to several labels and were rejected by all of them. The group was eventually signed by Trevor Horn’s girlfriend’s label, Island Records. But The Buggles had to drastically change the song. Luckily that all worked towards their benefit because their tune is now kinda synonymous with the launch of the pivotal MTV. Ya know, when they used to play music videos. And not shows about promiscuous young people hooking up in New Jersey.

“Video Killed the Radio Star” was a monster hit in many countries when it was initially released in 1979, BUT not in the United States. Until of course, MTV made it so. And although I’ll admit this song is not terrible, their other songs song more like something an arcade game would crank out in the final boss level.

Bo Donaldson and the Haywoods were a U.K.-based pop group famous for their song “Billy Don’t Be A Hero” that was supposed to be about the American Civil War. But it was released in the seventies toward the end of the Vietnam War. So people will forever associate the song with the Vietnam War. “Billy Don’t Be A Hero” was the band’s only hit… Many think The whistling marching band section is cheesy and heavy-handed. Although the subject matter is dark, the song is pretty light-hearted emotionally. almost makes war seem funny. The poor taste of the lyrics and the annoyingness of the whistling section make Bo Donaldson and the Heywoods one of those acts people love to hate.

Another English pop group active from 1969-1977. The name was inspired by the Eddystone Lighthouse, the world’s first off-shore lighthouse, that was constructed more than 300 years ago 14 miles off the coast of Plymouth. They were a one-hit-wonder music group most well-known for “Love Grows (Where My Rosemary Goes).”

The lead singer – Tony Burrows – left the group after the hit was released, but he didn’t own the rights to the band name. So it went on operating without him. Maybe the love might grow some more for this group. Stu and Dave still perform at gigs throughout Cornwall! Edison Lighthouse was really a one-hit-wonder kind of band – the rest of their songs are mediocre to say the best. Do you disagree? Let me know in the comments below!

Many connoisseurs of classic rock think Genesis has had little more than several bad songs… A simple google search shows several lists and blogs ranking the worst Genesis songs. The band changed sounds several times and some people weren’t really sure what exactly the band was trying to do… I guess people hate what they don’t understand.

All of the original band members were brilliant musicians of their own accord. Most notably Peter Gabriel and Phil Collins. Originally they were known as progressive rock but by the late ’70s they moved away from this sound… Some music critics argue that the band peaked in the mid-’80s actually. What are your thoughts? Do you like Genesis or not?

Morris Albert’s 1975 song “Feelings” is a super vague love song that leaves you wanting more. While the song is vague about feelings, many people actually have strong feelings about the song: good and bad. Most people wish this song would go away forever! People have made fun of this song since its release… Morris Albert could never gain traction in the US music scene, but he did have a close-knit fan group in his home country of Brazil. Good for him…

But another blow came to the singer when he was sued for stealing a melody for “Feelings.” The lawsuit was successfully brought by Gasté in 1988. Let’s just forget the song ever happened, right? This song made Morris Albert synonymous with cheese.

Do you remember the song “Muskrat Love” by Captain and Tennille? How could you forget it? It was pretty awful… I still have nightmares about muskrats… I once saw some furries in Times Square and it further cemented my nightmare.

“Muskrat Love” was originally supposed to be titled “Muskrat Candlelight.” But “Muskrats in the Dark” sounds even more terrifying. They didn’t even write the song! It’s a cover of the song written by Willis Alan Ramsey… The Captain and Tennille were even invited to play the song at the White House when Queen Elizabeth II came to visit in 1976… Who approved that?! Looking at you Gerald Ford… Totally not a groovy move. They were everywhere, they even had their own tv show. Perhaps this band ticked people off because they were a little too overexposed. I mean TV shows, White House visits? All for “Muskrat Love”?!?? Seems a little over the top.

The Captain and Tennille were a married couple who performed together – sadly, in 2014 after forty years of marriage they divorced. And each muskrat went their separate ways.

Do you like piña coladas? Mhmmmm, I know I do! But I can only do one or else I get a headache. A perfect metaphor for Rupert Holmes, who will never be able to shake the piña coladas song. Did you know he didn’t even like piña coladas? It’s even worse knowing what the song is actually about. Infidelity. With a happy ending of course. A man bored with his relationship answers a personal ad but when he gets to the rendezvous, he finds his girlfriend awaiting him, also bored with him. And wouldn’t you know it? The two fall back in love. Sure, that’s what would happen.

Many people love the song, but some people HATE it.  Probably because the story is so unbelievable and once again, it was overplayed. This song was released in 1979 and I think it foreshadows the next decade. The rest of the album is pretty ’80s. It’s worth a listen, he sounds like a more simple steely dan.  but he will forever be known as the guy who sang the Piña Colada song. Do you like piña coladas or gettin’ caught in the rain? Let me know below. I love piña coladas, but I don’t like getting caught in the rain…. soggy shoes are the absolute worst.

Holmes had one other pop hit in the ’80s, but other than that he was pretty unsuccessful until he moved into the musical theater scene. You might be shocked to learn that Rupert Holmes actually wrote a Tony-winning musical! He solely authored and composed the Broadway musical-comedy The Mystery of Edwin Drood, which won 5 Tony Awards including Best Musical. Impressive. Do you think he had a piña colada to celebrate?

Speaking of celebration, I think I need to go find some other artists to listen to… which band do you think was the worst band of the seventies? Are they on our list? If not, tell us in the comments below. We read every single one of them! And, we’re sorry if we offended anyone with our picks… Tell us why you would or wouldn’t have included the bands on your worst bands of the seventies list! We LOVE input from our audience!