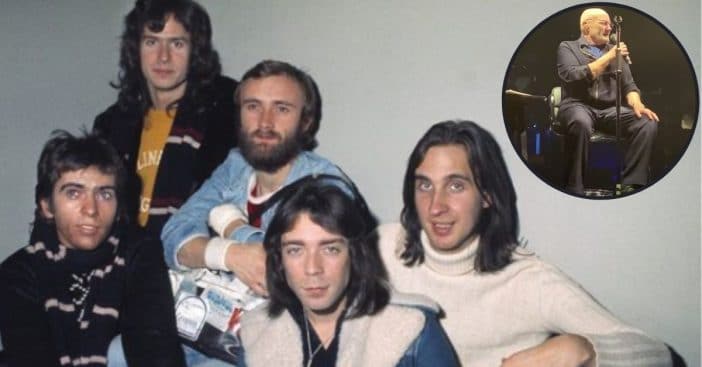 Phil Collins of Genesis is kicking off the band’s farewell tour, and he’s seen frail and singing from a chair… but he’s surely soldering on! The 70-year-old sang all of the band’s hits from his chair alongside guitarist Mike Rutherford, who also opted to play from a chair. The show took place in Birmingham.

The Birmingham show is the very first stop of the tour, and it’s their first live performance since 2007 for their Turn It On Again Tour. In a recent issue of Mojo, Collins himself reminds fans that this will be the final time that they’ll get to see the band live.  “This English and American tour, that will be enough for me,” he says.

Phil Collins is soldering on for this farewell tour

Collins has been open about his health struggles, including physical issues ahead of the tour. When asked how he’s prepped for his tour months in advance, he said, “I don’t do anything at all… I don’t practice singing at home, not at all. Rehearsing is the practice. These guys [his band mates] are always having a go at me for not, but I have to do it this way.”

Prior to starting the tour, Collins revealed that he could barely hold drumsticks in his hands. This is largely in part due to a spinal injury he obtained along with improper technique. “My vertebrae have been crushing my spinal cord because of the position I drum in,” he says. “It comes from years of playing. I can’t even hold the sticks properly without it being painful; I even used to tape the sticks to my hands to get through.”

In terms of his drumming, Collins revealed that his 20-year-old son has taken over for him. He adds that not being able to play “very frustrating ’cause, you know, I’d love to be playing up there with my son.”

So, is this really the end of Genesis? Collins says “yes.” He adds, “Just, generally, for me… I don’t know if I want to go out on the road anymore.”

Click for next Article
Previous article: Elvira Comes Out As LGBTQ, Has Been In A 19-Year Relationship With Woman
Next Post: Steven Spielberg’s Daughter Turns Heads In See-Through Dress