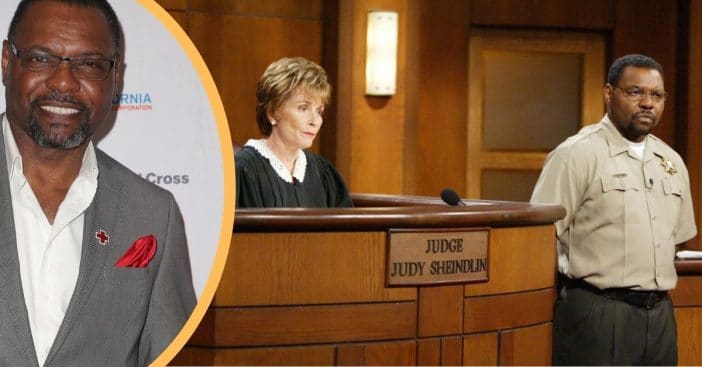 Petri Hawkins-Byrd had been with Judy Sheindlin through Judge Judy for 25 years, acting as court bailiff. However, as her return to the screen approaches with Judy Justice, Byrd has shared his surprise that he was not asked to return for the series.

Byrd, 63, opened up and spoke out against the choice, which he claims came about with no input from himself, and amidst familial health troubles. Judge Judy is credited with reviving the courtroom drama genre as well as putting a spotlight on the famously “no nonsense” family court judge – as well as those working in her courtroom.

Judge Judy concluded in the summer of 2021, after running for 25 seasons. Shortly after, Byrd, now long-established as a recognizable TV presence, had to dive into taking care of his wife, Makita Bond-Byrd, who ended up suffering health problems. Fox reports Makita had been a longtime producer in Judge Judy and had been invited to return for Judy Justice, but her health battles made that impossible to do so.

After three rounds of chemotherapy and brain surgery, Byrd could then turn his attention to the show. Reportedly, Byrd called Sheindlin and asked if he should start planning around working on Judy Justice. “She informed me I was not being asked to come along on the project,” Byrd stated. “I didn’t inquire as to why, that’s her choice. But she did inform me that fundamentally, I was priced out as the new bailiff on her new show. My salary would have been too much. I was curious: How would she know? She didn’t ask me. She didn’t give me an opportunity to have accepted a lower salary.”

Sheinlind confirmed the news that Byrd would not return as courtroom bailiff for Judy Justice in a statement provided to Fox. The statement, in part, also reads, “Byrd is terrific and we had a great 25 year run. This is a whole new program with a whole new cast and an exciting energy.” Byrd, who had been with the show and Sheinlind since 1996, admitted, “The call with Judy ended pleasantly enough,” but added, “I don’t think she understood how confused and dismayed I was after being there for 25 years, from the beginning of her career, and not being at least given the opportunity to say whether or not I wanted to continue that relationship.”

However, by now, Byrd is a TV personality as much as a bailiff, and his fame is solidified. So, he has sought and secured work elsewhere. He operates with the mindset, “God has something else for me,” and that has taken the form of a guest spot on The Bold and the Beautiful and voiceover work. Ultimately, he has decided to trust that whatever is meant to happen will be what happens.

Will you miss seeing the reliable presence of Petri Hawkins-Byrd as bailiff?