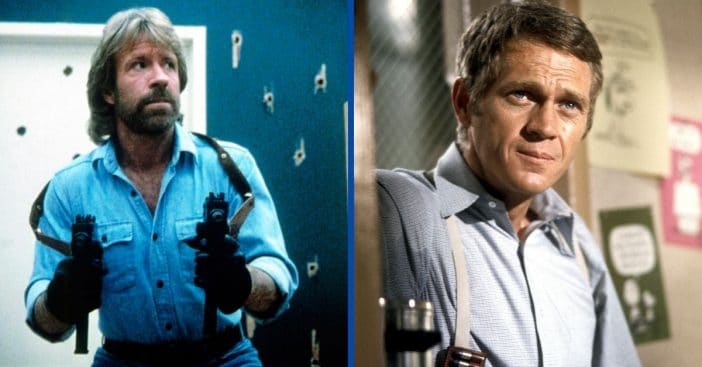 Life is a combination of determination, timing, networking, creativity…self-determination and stars aligning. It was no different for black belt Chuck Norris, whose gig teaching Steve McQueen helped him become a movie star too.

Norris’s early life did not suggest the trajectory his career would take. He described himself as not especially athletic, as well as being naturally withdrawn and not an academically exceptional student. It was when he joined the Air Force and was stationed in South Korea, where he began studying tangsudo, that he started finding a path. McQueen would turn that path into a clear road.

Jump back to the 1970s and the Magnificent Seven star was the King of Cool thanks to his antihero persona. Meanwhile, Norris became a karate champion with schools of his own across Los Angeles.

One student of Chuck Norris was none other than Steve McQueen. The gig was something of a dream for Norris, who saw Any Sunday with the actor in it. That was when, he went on, “I said, ‘If there’s any one actor that I’d like to meet, that’s the actor I’d like to meet.’”

The actor ended up inspiring him further still

Norris taught McQueen everything he knew about karate. While it was informative for the actor and helped round out his action capabilities, Norris noted financial struggles for his schools around that time. In response to this, McQueen suggested his teacher get into acting.

And so he did. Norris only got a significant foothold into the industry in 1974, thanks to McQueen’s encouragement. By 1982, he had almost a decade of movie experience under his belt, enough to land Norris a starring role in Love Wolf McQuade. Sadly, his big supporter and most famous pupil had died two years earlier after a battle with cancer. But he certainly left a big impact.