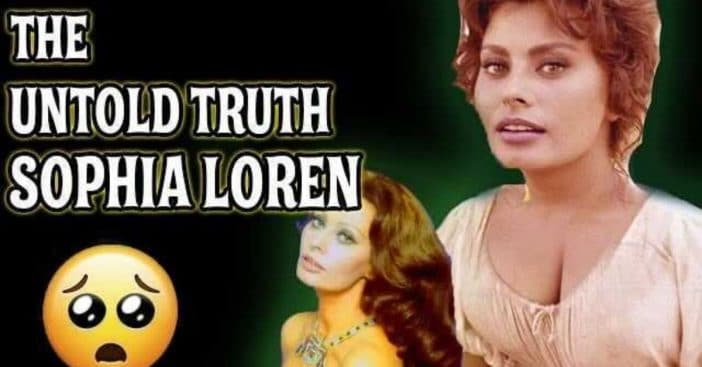 Sophia Loren is a strikingly beautiful movie star, one of Hollywood’s most elegant actresses who won awards playing salt-of-the-earth women, but from the impoverished Italian countryside to Hollywood’s brightest lights… how did she stay down-to-earth while absolutely obtaining her commanding presence. She credits much of her success to the hard work of her single mother, who did her best to support Sophia on her way to becoming one of the most recognizable movie stars of the twentieth century, and the woman credited with sparking the cat-eye make-up trend.

Sophia Loren knew she was beautiful, but she was also comfortable with her flaws. She famously scoffed at the idea of having plastic surgery done on her nose after cameramen complained. They simply had to learn how to shoot her face without creating unflattering shadows. Why mess with perfection? Today we’re further examining a bombshell. Let’s hop on in and see what makes Sophia Loren so special to classic cinema.

“It Started in Italy”

Born Sofia Villani Scicolone on September 20, 1934, in Rome, Italy to a single mother, Romilda Villani. Her father, Riccardo Scicolone – a man of noble descent – was not in her life at all and she only saw him three times her entire life. She was raised in her grandparent’s home near Naples, a city that was still reeling from the aftermath of the war. The Allies actually targeted the city frequently during World War II and on one occasion, Sophia was struck with shrapnel while trying to take shelter. She carried the scar with her for the rest of her life – a permanent reminder of her tough childhood. Despite her humble beginnings, Sophia Loren went on to become quite possibly the only international movie star.

RELATED: 86-Year-Old Sophia Loren Shares Why She Still Feels Like She Is 20 Years Old Inside

In 1950, She was discovered at a local beauty contest in Rome by Carlo Ponti – remember his name because he will become important later! She was one of the three finalists in the pageant winning the title “Miss Elegance 1950.” This wasn’t the top spot, however, but she was okay with that. She returned to the pageant in 2001 and 2010 to take part in the judging and the crowning of the winner. Never forgetting her roots.  Through her beauty pageant work, she was also able to book jobs as a model for still photos in magazines. This was one way for Sophia to begin building her audience and fan base.

She was only 16 when she appeared in her first film as an unlisted actress. She landed her first credited gig the following year in 1951 and continued to pick up small roles until the mid-fifties when everything changed. Remember Carlo Ponti? Well, he took a liking to young Sophia Loren and helped her become an international star. Sophia had to learn the business, reinvent her identity, first magazines altered her last name to Lazzaro, after Lazarus, claiming her stark beauty could raise the dead,  Finally she decided on the name Loren – Sophia Loren – which was a nod to another famous actress at the time.

Sophia eventually married Carlo Ponti not once, but twice! Ponti was much older than she- twenty-two years older in fact –  but this didn’t seem to affect their marriage. Which was unique, to say the least. The couple first married by proxy in 1957, but the legal paperwork from Ponti’s divorce from his first wife had not yet been completed. So Ponti and Loren annulled their marriage in 1962 to avoid bigamy charges, but the two continued living together. So In 1965, Ponti and Loren both became French citizens. And Ponti obtained the legal paperwork for his divorce, and finally was able to lawfully marry Sophia Loren. The couple had two sons: Carlo Ponti, Jr. in 1968 and Edoardo Ponti in 1973. They would remain married until Ponti’s death in January 2007.

Sophia Loren signed a five-film contract with Paramount Pictures in 1958 which continued her take off into the stratosphere. And it was hubby, Carlo Ponti, once again pulling the strings and getting Loren roles with some true Hollywood icons like Cary Grant, Clark Gable, and Frank Sinatra, among many.

In 1957, The Pride and the Passion was a film that Sophia co-starred with Cary Grant. The two soon had an affair, but Cary Grant was so infatuated with Sophia that it frightened her, straight back to Carlo Ponti. Sophia spoke little English at this time, so her lines were written phonetically. Pride and Passion didn’t garner great reviews but who cares, that same year she co-starred with John Wayne in the better-received Legend of the Lost.

Then in ’58, Loren appeared in Houseboat, a romantic comedy once again starring Cary Grant. The original screenplay was written by Betsy Drake, Grant’s wife, and Drake was supposed to be in the film, but Cary did some rewrites and ended up asking Sophia to do it instead. Yikes. The secret relationship between the two forced Betsy Drake to angrily flee Europe back to the US and compelled Carlo Ponti to separate from his wife and marry Loren by proxy.

You could say 1960 changed everything. Along with co-starring with a much-heavier Italian-food obsessed Clark Gable in It Started in Naples… Loren also put Hollywood on notice with the film, Two Women –  Loren delivered such a powerful performance, she became the first actress to win an Academy Award for a foreign-language performance. Loren wasn’t present at the 1961 ceremonies so her longtime buddy Cary Grant informed her the next day that she had won. She beat out Audrey Hepburn for Breakfast at Tiffany‘s & Natalie Wood for Splendor in the Grass. Wow.

Sophia won an additional 22 international awards for the film as well. Sophia Loren appeared in American and European films throughout the sixties. Many of which were very successful. An eventful decade for Sophia with her booming career and her sister’s marriage to the youngest son of Benito Mussolini in 1962.  In 1963, she was part of another Oscar win, with the romantic comedy, Yesterday, Today, and Tomorrow earning the Oscar for Best Foreign Film.  In 1967 she co-starred with Marlon Brando in A Countess from Hong Kong, but the two didn’t get along very well, especially after Brando commented after shooting the love scene, quote: “Did you know you have black hairs up your nostrils?” He could have been a contender.

Sophia Loren’s film career slowed down in the seventies and eighties because she wanted to be at home to care for her children. In 1977 she gained more critical acclaim with the film, A Special Day, Loren did a fantastic job of portraying the resigned housewife during Hitler’s visit to Italy. One of her daughters in the film was played by Sophia’s real niece, Alessandra Mussolini. Man, I’ll never get used to saying that last name in a relaxed tone.

In 1980 Sophia Loren published an autobiography, later adapted into a screenplay, Sophia Loren: Her Own Story. In 1981, she became the first female celebrity to launch her own perfume, aptly named, ‘Sophia’, and a brand of eyewear soon followed. Not finished with writing, Loren wrote a memoir in 2014 titled, “Yesterday, Today, Tomorrow: My Life.” Loren has recorded more than two dozen songs throughout her career, including a best-selling album of comedic songs with Peter Sellers; where once again she had to fend off romantic advances from her well-known male counterpart. With no fault to Loren, Sellers ever split with his first wife, Anne Howe during this collaboration. It appears people can’t get enough of Sophia. In September 1999, Loren filed a lawsuit against 79 adult websites for posting altered nude photos of her on the internet.

A Toast to Sophia

In 1991, Loren received the Academy Honorary Award for her contributions to world cinema, being declared “one of the world cinema’s treasures.” And she’s even still acting today. She has starred in two of her son, Edoardo’s films: The Human Voice and The Life Ahead. Today, Sophia lives in Switzerland and will turn 87 in September of 2021. But this woman is still as beautiful as ever, exuding the grace and charm that we have come to know her for.

So let’s discuss… Do you have a favorite character that Sophia Loren portrayed? Or a favorite movie entirely that she’s been in?? I have to go with The Fall of the Roman Empire in (1964), who doesn’t enjoy a good epic. Let us know in the comments!

Click for next Article
Previous article: This Is The Moment Princess Diana And Queen Elizabeth’s Relationship Soured
Next Post: Dolly Parton Opens Up About How She Related To Elvis Presley