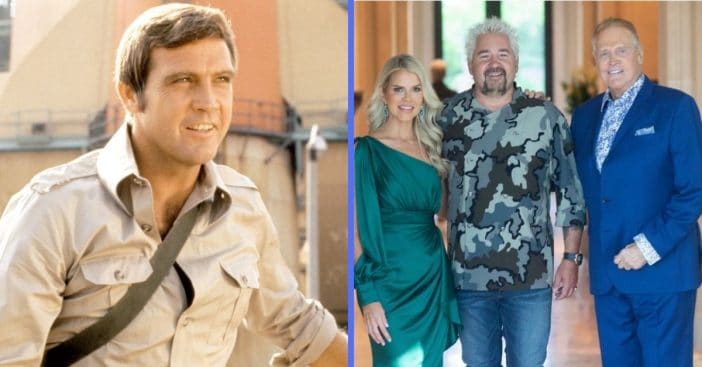 Lee Majors, a man 82 years alive, just getting better, faster, stronger – and not hungrier, thanks to Guy Fieri. The Diners, Drive-Ins and Dives host swung by Houston to gift a special birthday dinner for the bionic man himself as he turned 82 this spring.

Fittingly, Fieri served up six meals – presumably, one for every million dollars spent bringing Steve Austin back from the brink. The stars aligned for this ultimate crossover, as Fieri had been in the same state as Majors for his show, allowing him to cook for Majors.

Guy Fieri cooks up a feast for Lee Majors

2021 isn’t actually the first time the two met. That date falls back in 2017 when they both met at at an Ultimate Fight Championship. Then, this year on April 23, Guy Fieri happened to be in Houston for Diners Drive-Ins and Dives the same day Lee Majors celebrated turning 82.

Doctors Lisa and Stanley Duchman, owners of Duchman Family Winery, hosted Fieri and Majors for the birthday bash. Majors received a cake from Weights & Measures, which is the location Fieri went to for his Food Network show. For the occasion, they provided a white chocolate buttercream cake complete with a side of raspberries.

While it was Majors who could celebrate his big birthday among friends and food, Fieri actually found reason to feel excited on this occasion. “This is my honor,” Fieri insisted. “I admire Lee even more now than I did as a kid. Lee is the real deal and highly regarded by his friends and the entertainment industry.”