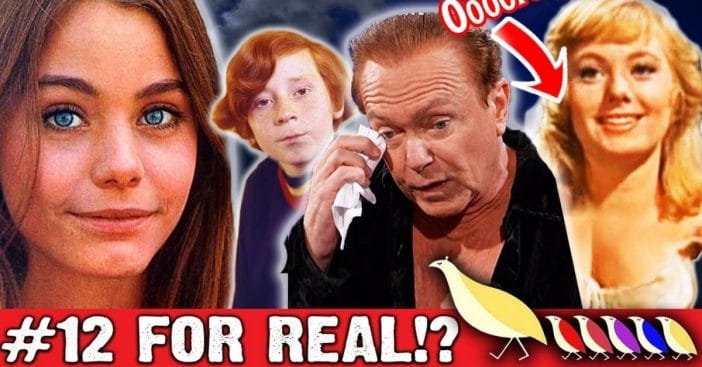 All aboard the bus! ‘Cause we’re hittin’ the road on a special Partridge Family tour! I’ll leave the singing to David and Shirley, but I’ve got a bunch of stories to tell you about the Partridge family ranging from the strange to the steamy. Although a squeaky clean show, behind the scenes, there were some shocking issues.

There is a dark side to fame and fortune that always seems to poke its head out when the stakes are high and the music is rockin’. Let’s check out these crazy facts you wouldn’t believe.

Here’s a story, of the Cowsill family- sorry, wrong show. The inspiration came from the Cowsills, a real, musical group of relatives including seven children – 6 boys, 1 girl – and their mom. The band hailed from Newport Rhode Island and grew in popularity in the mid-’60s and ’70s. The Cowsills and Partridges have some similarities, most noticeably the familial makeup and absence of a father. But they never actually appeared in the show inspired by their lives. They almost did. But producers insisted on having Shirley Jones play the family matriarch. Years before, Jones had actually introduced the Cowsills at one of their earlier concerts. Funny how things work out.

RELATED: ‘The Partridge Family’ Cast Then And Now 2021

Oh, my stars, look at that house! Let’s go say hi to the Kravitzes! Well, depending on what show you watch, the house’s residents might change. The Partridge Family shared a home with another popular primetime family, the nosy Kravitzes who lived next door to the witch Samantha Stephens herself. That whole block’s a star by itself too, used in shows like I Dream of Jeannie, Dennis the Menace, and The Donna Reed Show. It works in reverse, too. Watch The Partridge Family and you can see Samantha’s house while the Partridge bus drives by. It also made a guest-appearance in Reese Witherspoon’s Pleasantville. I wonder who will move in next?

Shirley Jones fantastically played the head of the Partridge family, raising the kids and keeping their musical endeavors afloat. One of the first “momagers.” But Jones was almost the head of a different household: The Brady Bunch. Despite being offered the role, Jones turned it down. She explained, quote, “While the idea of playing the mother in The Brady Bunch was initially attractive to me, I turned it down because I didn’t want to be the mother taking the roast out of the oven and not doing much else.”

Can you imagine The Brady Bunch with Shirley instead of Florence? Let us know in the comments if you think that would’ve been a better show that way! The idea of being one of the first, hugely visible working mothers in US TV history was a lot more appealing to her. And, wouldn’t you know it, The Partridge Family schedule let Jones be just like her TV counterpart: a working woman who could also take care of her kids! Right on, Shirley!

The Trouble with Danny

No one will deny Danny Partridge was a troublesome prankster. Problem was, so was his actor, Danny Bonaduce. He took his role as the troublemaker a little too seriously and the cast ended up putting up with a LOT. Sometimes, he forgot his lines so often, they had to do as many as 36 takes to get one scene down.

Eventually, the cast reached their limit. First, Shirley Jones went full Mom Mode on him and ordered Danny to his room. Problem was, the set didn’t have an actual upstairs. And technically Jones wasn’t his mom. Then, the cast members plotted and recruited Susan Dey to pour milk right onto Danny to get him to cool it, already. That moment actually ended up in the show, though with Keith instead. Got milk? But Danny grew up fast. Dave Madden, who played band manager Reuben Kincaid, actually gave Danny cigarettes while on set. Yea, Danny grew up fast. He lost his virginity at 13 – with a fan. Then, he tried making the moves on Jodie Foster, who was all of 10 at the time. Hey, what you do on your own time is all you but remember your lines, Danny!

The year is 1970. The Beatles had just released their album Let It Be, right alongside their movie of the same name. Fans rode the waves of the British invasion. Despite mixed reviews, the album’s single “Let It Be” quickly topped the charts. But beware Beatles, there’s a new sensation coming right for you. The Partridge Family released what would be their biggest hit, “I Think I Love You.” Even against full-throttle Beatlemania, The Partridge Family soared to the top of the charts and reached number 1. They had officially done the unthinkable: dethrone the Beatles. But over 50 years later, I wanna know, which song holds up better today? Let us know in the comments.

Between singing, acting, and being possibly the biggest heartthrob of the ’70s, David Cassidy should’ve been rolling in it. Not quite. You may have heard horror stories about musicians getting completely robbed by their managers or record labels. Something like that happened for The Partridge Family, too. Without meaning to, David Cassidy became a household name. That’ll happen when people use your image on lunchboxes, T-shirts, and even board games – without permission. His contract didn’t demand royalties either, even though the David Cassidy name was used to sell out stadiums of fans. On top of it all, some fans got REALLY creepy and did things we’d definitely call assault in today’s era. He couldn’t go anywhere without girls and women practically mobbing him.

For all his grief, Cassidy made all of… $600 a week. The rest went to Sony or to the people using his name and image – never to him. Cassidy put up with a lot and tried to stage his own rebellion by giving a really exploitative interview with Rolling Stone and went as far as to pose nude for the cover. Between that and chatter about his drug use, he was breaking away from the boy teen idol image that fans swarmed to.

‘Tis better to have loved and lost than never to have loved at all. That’s advice Susan Dey had to keep in mind every day of her workweek while she pined from a close distance for David Cassidy. Two years her senior, Cassidy just thought they were really great friends. So great, he told her all about the fawning women he faced on a daily basis. It took Shirley Jones stepping in and telling Cassidy he’d been friend-zoning and torturing his biggest crush for years before they tried their hand at dating. Things didn’t last, and maybe pining would have been better with how mad Dey got with him. When they split, they split for good.

Although she had a nation of adolescent boys obsessed, during the show, the beautiful Susan Dey contended with serious body image issues. So she began a strict diet. Dey is 5’7″ and at one point dropped all the way to 92 pounds, but thankfully, Danny Bonaduce very delicately told her, quote, “What’s wrong with you?! Your skin is orange! You look disgusting.” Not so nicely put, but, it gave her a big wake-up call.

Sex, drugs, rock and roll. That’s the true music scene for everyone – including the head of the Partridge family, Shirley. She and her husband Jack Cassidy, father of David Cassidy, would sometimes have a quickie across the street from the set. They wouldn’t always be the only ones in that quickie, either, sometimes inviting others for a Group Encounter, encouraged by Jack. She even alleged Joan Collins almost got in on it, but Shirley’s since retracted that claim. Still, Shirley and Jack were, in a word, insatiable, going to parties with lines of coke and plenty of porn films. They really lived that rock and roll life.

Such a legendary show had its fair share of huge guest stars. Worlds collided when Rob Reiner, known to All in the Family viewers as Meathead, played a man called Snake in The Partridge Family. Although it was fun seeing him act, he’s since become one of the best directors in the biz. Any fans of The Princess Bride? How about Stand By Me? Or is Spinal Tap more your speed?

He wasn’t the only famous guest star. Richard Pryor is part of an episode that namedrops even more legendary entertainers like The Temptations. The Partridge Family had to play at their venue. Rosemary DeCamp, famous for 157 episodes of The Bob Cummings Show, graced The Partridges 4 times over the years. Even the Scarecrow himself, the legendary Ray Bolger joined the cast for three episodes in the early ’70s as Grandpa Fred Renfrew – I certainly remember those.

“Meet the Partridges”…  doesn’t roll off the tongue as much as “Meet the Jetsons,” but the premise did! The Partridges were a household name with plenty of familiar faces. And producers saw an opportunity. Send ’em to space with the animated show, Partridge Family 2200 A.D.

Well, the bus is pulling back home. But that was one eventful tour for our favorite musical family of the ‘70s. Castmates became family, coworkers became crushes, lines were crossed, lives were saved, and so much more. Who grew up watching The Partridge Family, who was your favorite cast member? Did anyone have any cherished themed merch? Share some of your favorite memories in the comments below, we read every one!