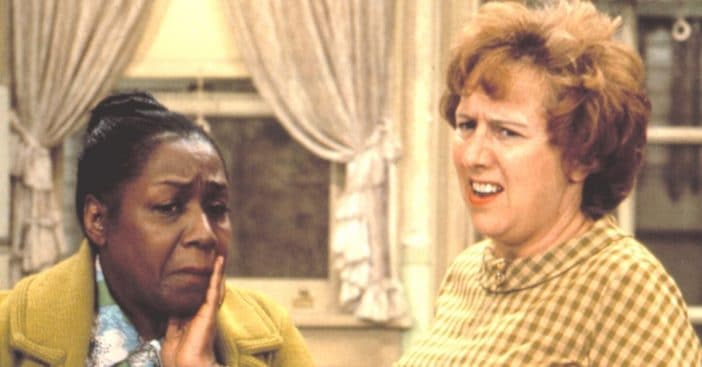 Isabel Sanford looks back at her time on All in the Family and remembers her dear friend Jean Stapleton. Jean played Edith Bunker and Isabel played Louise Jefferson. The two were best friends on the show and in real life as well.

Isabel recalls a scene where Jean cried real tears. It was when they were filming Isabel’s goodbye scene. She was moving on from All in the Family to the spin-off show The Jeffersons. While it was a huge honor to have more of a leading role, she admitted it was very difficult to leave the show.

This goodbye scene was very emotional

Isabel said they weren’t really acting while filming the goodbye scene. They were both sad to be no longer working together. Isabell said, “It was sad to say goodbye. Edith and Louise have a little scene, a goodbye scene. She was crying, her eyes were red, and I was crying.”

RELATED: ‘All In The Family’ Started A Record Number Of Spin-Offs

She continued that she “really hated to leave. [Stapleton] wasn’t happy about it, either. She was so…you could see that her eyes were red. Which made me cry, too.”

Isabel was worried that The Jeffersons wouldn’t have the same success that All in the Family did. Luckily, she was wrong and both shows are beloved and iconic. In conclusion, watch their goodbye scene below:

Click for next Article
Previous article: Do You Remember The Original Ward Cleaver?
Next Post: Whatever Happened To Max Wright, Willie Tanner From ‘ALF’?